Archaeological fashion in the 1930s 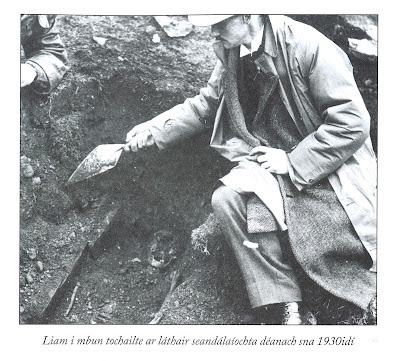 To the general public, archaeologists are associated with one fashion item: the fedora hat. Amongst ourselves, we frequently berate each other (and our younger selves) for such fashion faux pas as denim shorts, trowel holsters, and stripy jumpers … at least in the days before Health and Safety turned the profession into a day-glow sea of fluorescent high-viz vests. But there was once a simpler time … a happier time … a time when archaeology not only knew fashion … we knew STYLE!

I was sent the accompanying photograph by Eoin C Bairéad (who is responsible for the regular ‘News from the Net’ feature in Archaeology Ireland). The splendidly turned-out archaeologist is Liam S. Gógan (1879-1979). He joined the National Museum of Ireland in 1914, and from 1936 until his retirement in 1956 he was Keeper of the Art and Industrial Division. Gógan was also a well known Irish-language poet and his Selected Poems have just been published by Coiscéim, in an edition by Dr. Louis de Paor. The book includes the above photograph of Liam, excavating ‘late in the 1930s’. While much of Europe was getting excited by marching and coloured shirts around this time, Gógan cuts a dapper figure, deep in concentration, as he wields a massive trowel around a slab-lined inhumation. Although the combination of tweed overcoat, raincoat, and broad-brimmed hat are unlikely to be replicated on any modern excavation, it is the perfectly adjusted wing collar that speaks to us from an age of elegance and refinement long gone from field archaeology.

As Eoin himself says: “While it is a truth universally recognised that sartorial standards among Archaeologists have declined almost as much as the Irish economy, I am still impressed with Liam's style, particularly the wing collar.”

If you’re going to do any shopping through Amazon, please go via the portal below. It costs you nothing, but it will generate a little bit of advertising revenue for this site!