[** If you like this post, please make a donation to the IR&DD project using the secure button at the end. If you think it is interesting or useful, please re-share via Facebook, Google+, Twitter etc. To help keep the site in operation, please use the amazon search portal at the end of the post - each purchase earns a small amount of advertising revenue**]

I had planned to put this post out ages ago, but then I found out that October is California Archaeology Month ... so it just had to wait! 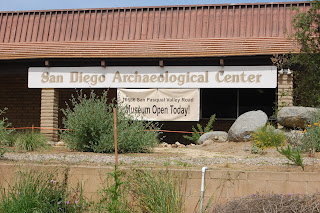 As some readers of this blog will know, I spent part of March and April this year (2013) in San Diego, California. While there we did all the tourist things: SeaWorld, Legoland, San Diego Zoo, along with sampling large amounts of the local seafood and beer (I strongly recommend the Red Trolley ale). I even managed to get myself invited to the beautiful campus of the University of San Diego to talk about Irish archaeology. As part of Anthropology 494: Native Peoples of Northwest Europe, I was invited to speak to the senior class of undergraduates about two sets of excavations I directed at Gransha,Co. Londonderry, and Gortlaunaght, Co. Cavan. I had a fantastic time and enjoyed myself immensely, and I hope that the students and faculty members that listened to me did too.

On one particular day we left the relative cool of the beach and headed inland to the San Pasqual Valley and the San Diego Archaeological Centre. Their website (which is well worth a read) explains their mission best: They are a “curation facility and museum where visitors can learn the story of how people have lived in San Diego County for the past 10,000 years. In addition to its role as a museum, the Centre serves as an education and research facility and is the only local organization dedicated to the collection, study, curation and exhibition of San Diego County's archaeological artifacts”. I was visiting there merely as a tourist, rather than a professional archaeologist, so I did not have the opportunity to catch more than a glimpse of the impressive storage and curation facilities on site. But what I did see – the public exhibition spaces – are just stunning! Rather than write at any length about the Centre (again, read their webpage – it has everything you need to know about the wonderful job they do), I wanted to post some photographs of the exhibition to give a flavour of what's to see.

I think that the only thing that the Centre’s website fails to mention are the humming birds. Outside the building, in the shade of the overhanging eaves, humming birds – dozens of them – come to feed and drink. They’re easily startled, but if you sit still and wait they will hover just feet from you. I loved the archaeology displays and hope to return again one day, but it’s nearly worth the trip just for these beautiful little birds as they dash, dart, and just as suddenly hover in mid-air, their wings all blurred. If you have an archaeological inclination, and are heading in that direction, please drop in to the San Diego Archaeological Centre – you’ll not be disappointed! To the good people of the SDAC, I say: Thank You for a wonderful day out, keep up the good work, and please don't forget to feed the humming birds! 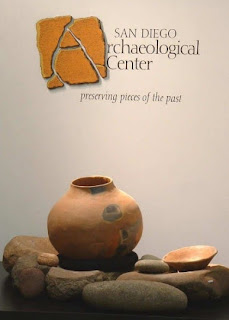 Note: I am aware that the San Diego Archaeological Centre spell the last word of their name in the American fashion ‘er’, rather than in the English manner, ‘re’. I also know that I should have respected this and preserved their spelling … but it was just too alien to me … I tried, but it just looked wrong! Sorry!

Posted by Robert M Chapple at 7:27 AM No comments:

I apologise in advance – this post has almost nothing archaeological to it. However, I’d be very grateful if you would read it and consider sponsoring me in this charity endeavour.

I have a very distinct memory, from when I was a very young child, of seeing a fire walker on TV. Even though the presenter explained the physics involved – that the feet aren’t in contact with the coals for any significant time, certainly not enough to induce a burn – it left an indelible image on my subconscious. Since that time - and despite all scientific evidence to the contrary - the concept of fire walking has, to me, been imbued with layers of romanticism and mystique. It has become synonymous with feats of bravery and exoticism … and … I suppose, with the passing years it has become fossilised in my mind as something that happens to Other People. Adventurous folk. Certainly not to me.

That’s probably where that one would have stayed – another entry in a catalogue of weird experiences that I might like to try, but certainly wouldn’t be seeking out anytime soon.

Firstly, I read Stuart Rathbone’s fantastic paper on, among other things, the issue of mental health in commercial field archaeology. The four and a half inch pointing trowel ... and the damage done is an immensely important piece, not least for being the first of its kind to openly discuss these issues for an Irish audience. Since it was published in September it has already had over 5300 views. The fact that the people reading this are from all across the globe, Ireland, the UK, the US, Europe, Asia, Australia, argues that it is of much wider significance and interest than a purely ‘local’ story. So much of it rings true to my own experience in commercial field archaeology on this island. It got me thinking about mental health issues not just in archaeology, but in the wider community.

Secondly, an email went about my place of work asking for volunteers to do a charity fire walk. I gave it a glance, thought briefly about it – and deleted it. True, it had immediately reignited (excuse the pun!) my childhood memories of dashing and quasi-mystical deeds, but I concluded that it wasn't really 'my thing'. I realise now that even though the email had been deleted, I was still thinking about it. It kept nagging at me that this was something good, something I should consider more seriously. I eventually rescued the email from the recycle bin and thought some more. It was only when discussing the topic in a team meeting I that admitted that I was 'thinking' about it, that the proposition took on a more concrete aspect for me. The simple act of saying it out loud galvanised my resolve. After that things moved pretty fast - by the end of the day, I'd replied to the email and volunteered. Within 48 hours I received an email thanking me for what I was going to do.

The purpose of this fire walk is to raise money for and awareness of the PIPS charity. Rather than attempting to paraphrase their role and mission, I’ll let them speak for themselves.:

[PIPS provide] Support services for people in suicidal crisis and those impacted by suicide including specialised support for young people bereaved through suicide and care services to help people engage successfully with long term mental health care.  We also have a bereaved families group which is a self help group for those who have lost a loved one to suicide.

Taking part in this fire walk will support the PIPS charity and provide training for people in identifying and helping people in crisis. I realise all too well that it is often impossible to identify those most at risk until it is too late. At the very least it will play a role in the wider socialisation of the discussion about mental health and provide a means by which we can discuss suicide and related subjects that are still, if not taboo, then uncomfortable for many people.

But here’s the thing … I’ve been trying to convince myself that I will be doing good. I’ve tried to tell myself that I’ll be partaking in a rite of passage that stretches back to Iron Age India (c. 1200 BC). I’ve tried convincing myself that the physics is good and that it won’t burn my feet off (I’m short enough as it is!). I’ve also attempted to console myself that there is a powerful psychological boost waiting for me once I complete this. Right now (October 6th) I’m lightly terrified.

But I’m still going to do it.

If the thought of an overweight, middle-aged, recovering archaeologist facing his fears of being immolated in a flash of combusting leg hair, while trying to raise some cash for a deserving charity, isn’t enough to move you – I promise to post photographs of the event if I meet my target.

I’ve set myself the target of raising £500 for this cause and I would be immensely grateful if anyone reading this post would, please, donate even only a pound or two. It’s all due to happen on the evening of the November 7th at Queen’s University Belfast. I’ve set up a secure Just Giving account that you can donate to, if you wish – just click on the button at the end of this post! 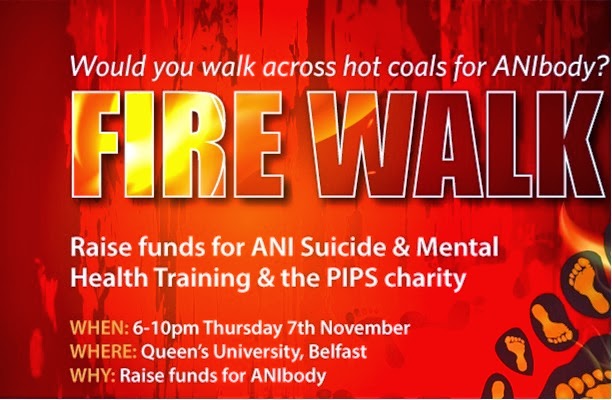 Posted by Robert M Chapple at 12:47 PM No comments:

The Archaeology of Gatherings

This October bank holiday weekend will be an exciting one for Sligo as both the Archaeology of Gatherings Conference and the Sligo Live Music Festival are taking place.

The Archaeology of Gatherings is a thematic international conference taking place at the Institute of Technology, Ash Lane, Sligo, Ireland, at the end of October. As 2013 is the year of ‘The Gathering’ in Ireland the theme was chosen to explore why people over millennia have come together for assemblies and social interactions of various forms. By bringing together a range of speakers from different disciplines, time periods, and countries, the conference aims to explore the material culture and psychology behind gatherings of people.

The conference papers examine a broad spectrum of aspects on the theme of gatherings. While some aim to interpret the archaeological evidence available to us from prehistoric through to more recent times, others present insight into the psychological and sociological aspects of assemblies from contemporary contexts. The diverse academic backgrounds of the speakers, who are coming to Sligo from all over Ireland, the US, the UK, and Norway will contribute to our understanding of the significance of gatherings in people’s lives throughout the past and for us today.

The conference commences Friday evening (25th) with informal drinks at the Glasshouse Hotel in Sligo. Conference papers will be held all day Saturday with a demonstration by Ancient Music Ireland during lunch break and a poster session held during the tea and coffee break. On Sunday morning the conference papers will continue until lunch time. In the afternoon there will be an unofficial field trip for anyone who is interested.

To register and for further information about the conference and the speakers visit our website or find us on Facebook. 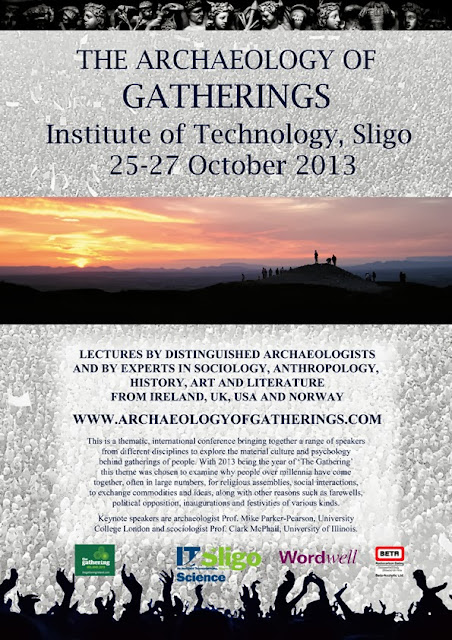 List of the speakers and papers at the Archaeology of Gatherings conference:

Dr Stefan Bergh, Dept of Archaeology, NUI, Galway.
Meeting at the edge – Turlough Hill as a place of prehistoric assembly.

Michael Mac Donagh, NRA.
Under the same night sky- the architecture and meaning of Bronze Age stone circles in mid-Ulster.

Dr Una MacConville, Sociologist and Visiting Fellow, Centre for Death and Society, University of Bath, UK.
Gatherings on the ‘Far side banks of Jordan’.

Dr Richard Madgwick, Cardiff University.
A Passion for Pork: Feasting in southern Britain from the Neolithic to the Iron Age.

Stephen Dixon, MSc, IT Sligo.
Archaeological and Anthropological aspects of 'forced gathering' from within the Jewish Holocaust.

Posted by Robert M Chapple at 12:09 AM No comments: