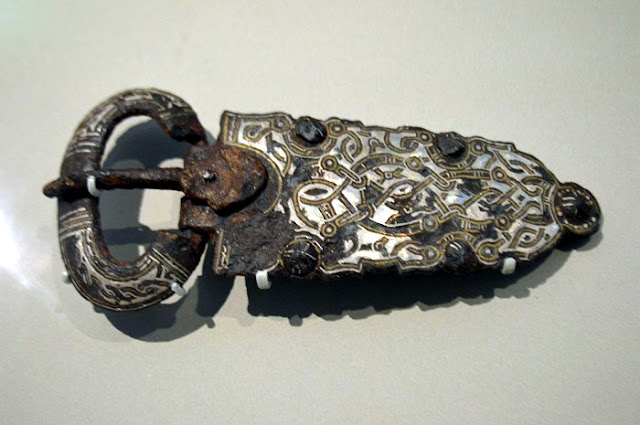 This belt buckle is made of forged iron and inlaid with silver and either brass or gold. It dates to the period from 600 to 700 AD and may have been made in France, but there appears to be no record of exactly where it was discovered and how. All the V&A’s website can say is that it ‘may well have been found in a grave, buried with its owner’.

The decoration is in the form of a series of what I would describe as intertwined serpentine forms. However, the V&A go with ‘fabulous beaked snakes’, a term that is both hilarious and somewhat terrifying. It also reminded me of an actual beaked snake, the rufous beaked snake (Rhamphiophis oxyrhynchus). It is named for its hooked snout, which it uses to dig burrows. In my head, I’ve always associated the snake with the city of Oxyrhynchus, in Middle Egypt, itself famed for the great stash of ancient papyri discovered there by Grenfell and Hunt. In my head, I’d presumed that the snake was in some way named after the city, but the city was actually named Oxyrrhynkhoupolis (Οξυρρύγχου Πόλις), the ‘town of the sharp-snouted fish’ known from the local waters. The snake is ‘oxyrhynchus’ in his own right, from his own sharp snouted appearance. It only took a few moments of research to find the truth, but the damage was already done … I’d imagined burrowing, Merovingian beaked snakes, sitting Smaug-like on their hoards of texts and the image wasn’t going to leave with any ease … and now you have it too! You’re welcome!
Posted by Robert M Chapple at 6:28 PM No comments:

The War of Troy tapestry 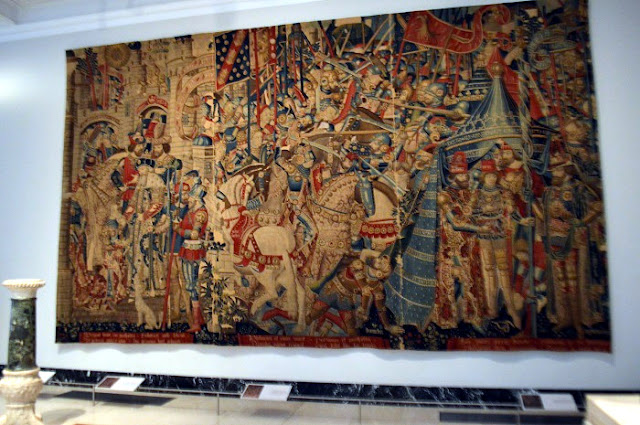 I just think that this tapestry is marvellous. I could leave that as my only comment on this post and it really would be enough. When it comes to assessing the quality of tapestries, you really only need to know two things. Firstly, the best ones were made in Belgium and, secondly, the high-water mark for production was the 15th century. This example, taking as its subject the Trojan War, sits exactly in that Venn diagram intersection. It was made in the Belgian town of Tournai in the period from 1475 to 1490. In every way, it is the physical manifestation of tapestry making’s ‘sweet spot’.

Although we don’t know who this piece was commissioned by, it was in the possession of Charles VIII of France by 1494, when he paid to have work done to it to cover over the heraldic devices of the original owner with his own symbol based around a rayed sun. As (in every sense) majestic as this tapestry is, it was only ninth in an original series of eleven – what a scene that must have been! 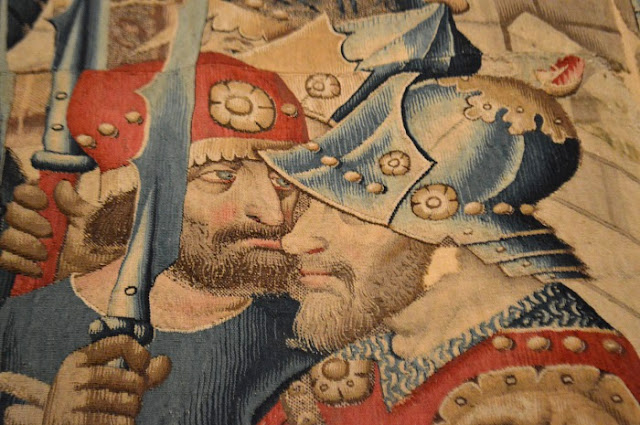 Although the story of the tapestry series is that of the Trojan War, the interest wasn’t solely historical or literary. Part of its appeal was that nobles of the period saw the tales as containing important lessons and morals for their own behaviour. This aspect of the piece is brought to the fore when we consider that the costumes are not authentic to ancient Greece and Troy, but are instead a curious muddle of the classical, the exotic, and the contemporary. As the V&A’s online catalogue notes, this is ‘all very typical for the late Medieval period when depicting Classical scenes – in particular the lionheaded shoulder armour and tabbed skirts.’ Game of Thrones may have finished (for now!) but I find it difficult to look on those soldiers with lion heads on their shoulders and not immediately imagine that they're Lannisters, not Trojans ... and immediately support the other guy!

For me, one of the chief attractions of this piece are the lively and realistic faces of so many of the characters depicted here – both the central players and the ‘extras’. They have a feeling to them (to me, at least) that they were based on real people, possibly well known to the original artist. While the identity of the artist may have been lost, it is known that the Tournai merchant, Pasquier Grenier, owned the cartoons for the set and supplied versions of the design to a number of different patrons. I still look at this series and wonder if one of the faces staring back at me may be either our artist or even Grenier himself … a well-to-do merchant that made it into the presence of Royalty. We may never know for sure, but the speculation is too much fun to ignore. 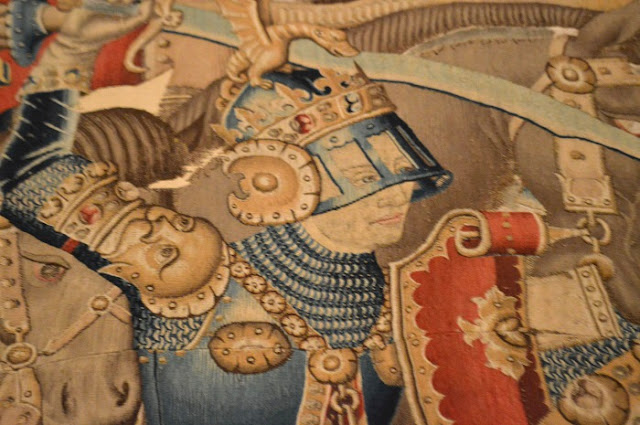 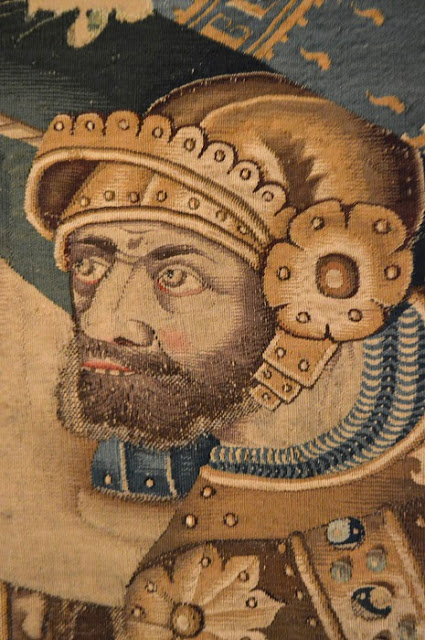 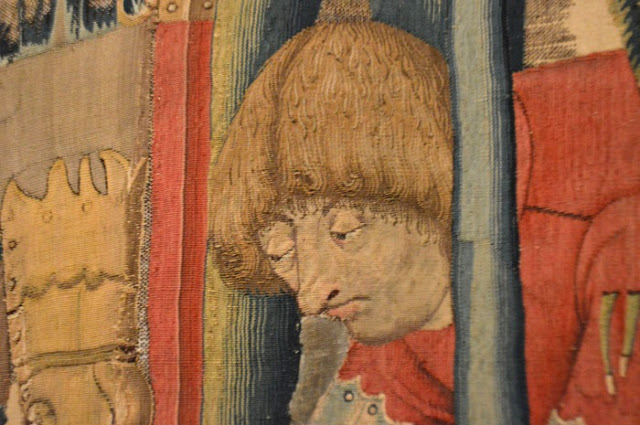 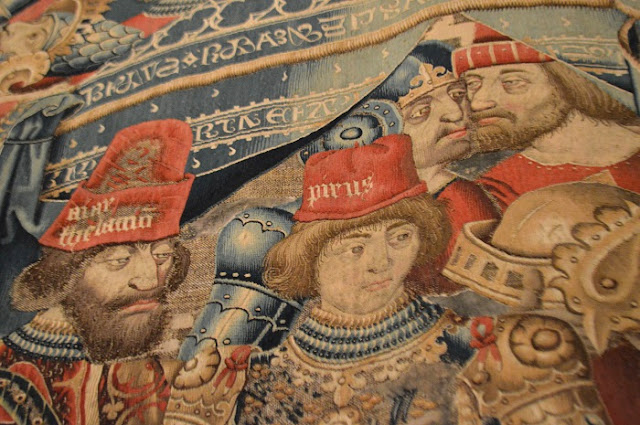 Posted by Robert M Chapple at 8:35 AM No comments:

The British Museum holds nine items identified as coming from Co Wicklow. The majority of these (4) are assigned to the Neolithic/Bronze Age, followed by the Bronze Age (2). The most common object type represented are axes (2). Only three material types are represented in this assemblage: Stone (5), Metal (3), and Pottery (1). 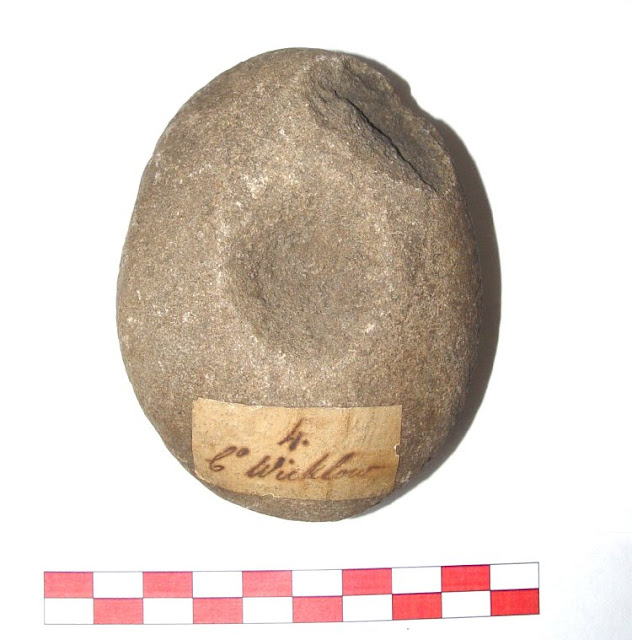 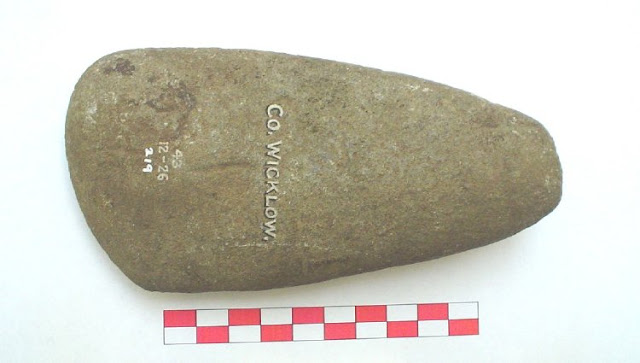 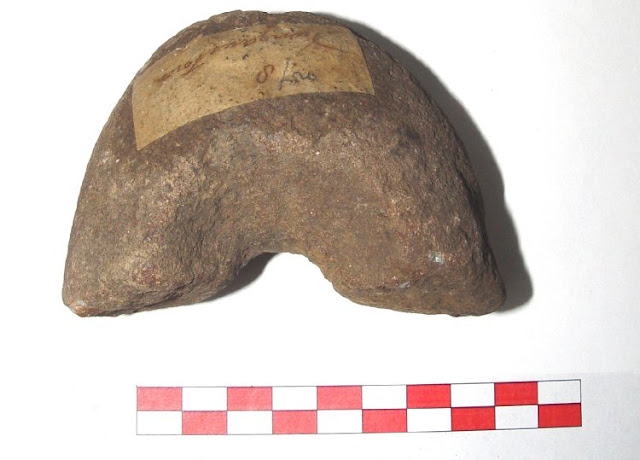 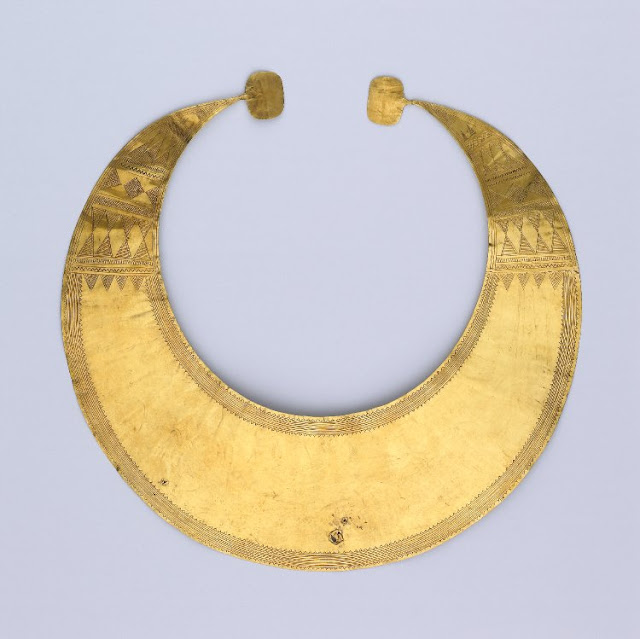 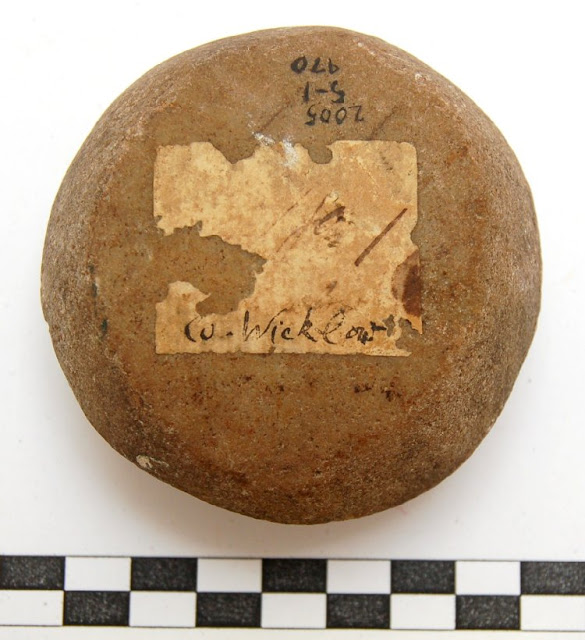 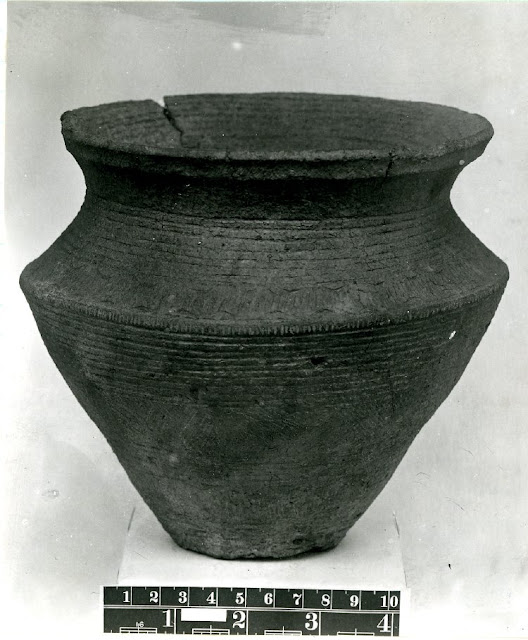 Iron Age: Metal item
Wicklow
horse bridle-bit
19040312.200
Copper alloy bridle-bit. Irish type with rings of flattened, sub-triangular section and stop-studs cast in one with the rings.
100 BC - AD 100 (circa)
http://britishmuseum.org/research/collection_online/collection_object_details.aspx?objectId=826234&partId=1

< Table of Contents
Posted by Robert M Chapple at 9:35 AM 1 comment: 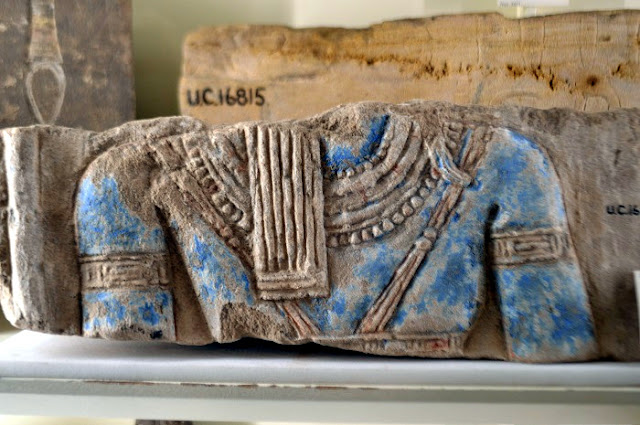 This fragment of a temple relief from Armant is carved in sandstone and dates to the Ptolemaic period (305 BC to 30 BC). Unfortunately, as the figure is lacking his head it is not possible to identify exactly which deity is represented. Instead, I’m just taken by the fact that this wonderful blue paint has survived so well for over 2000 years.
Posted by Robert M Chapple at 9:17 AM No comments:

The British Museum holds eight items identified as coming from Co Kildare. The majority of these (3) are assigned to the Bronze Age, followed by the Late Medieval period (2). The most common object type represented are floors (2). Only three material types are represented in this assemblage: Metal (5), Pottery (2), and Stone (1). 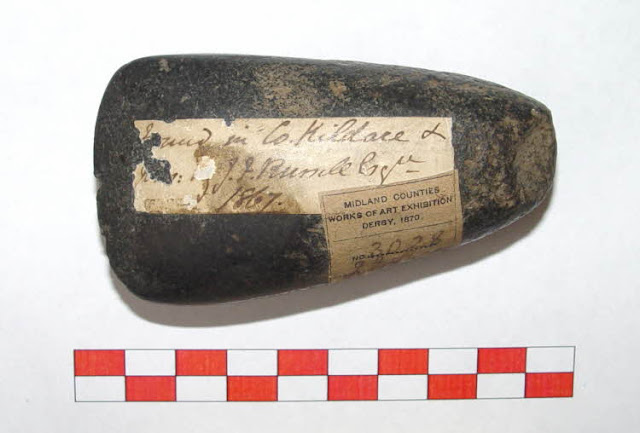 Kildare
sword
18761214.130
Copper alloy sword. The tang has been cast on. It has one rivet-hole and there are three rivet-holes in the rounded butt; the repair may have filled up another.
http://britishmuseum.org/research/collection_online/collection_object_details.aspx?objectId=807809&partId=1 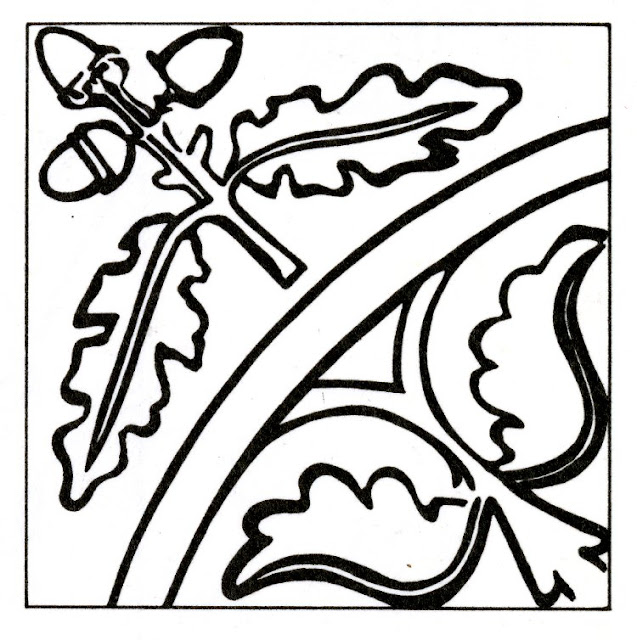 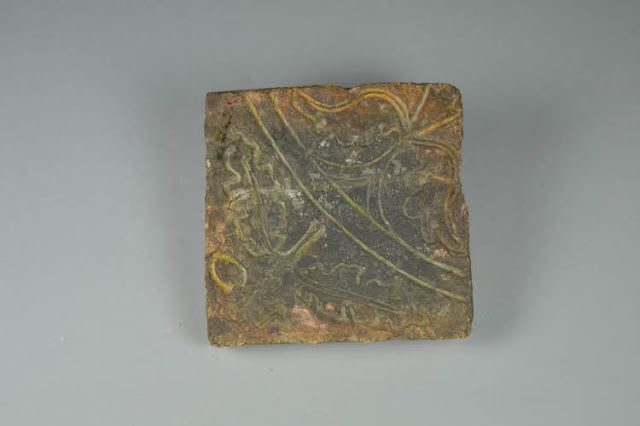 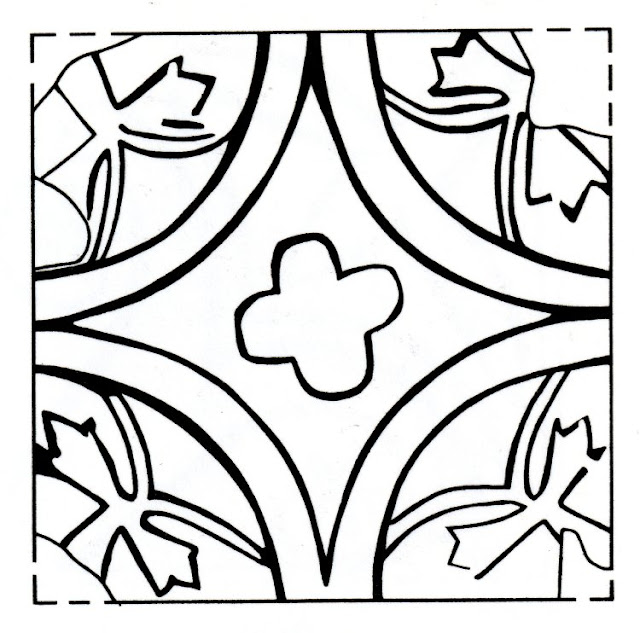 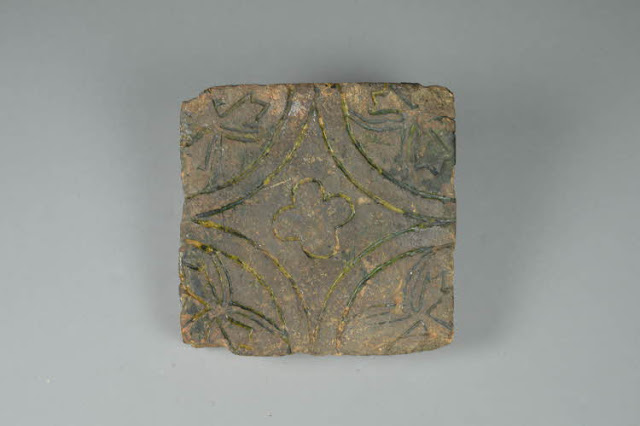 < Table of Contents
Posted by Robert M Chapple at 10:19 AM No comments: