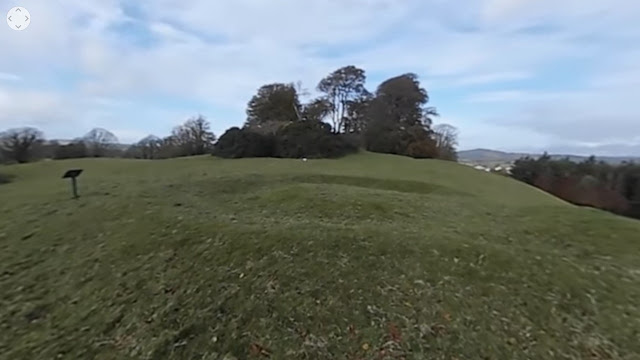 At the end of last year the Chapple family headed off to explore the archaeology of Tyrone & Fermanagh and we stopped along the way at Clogher Hill Fort.

Clogher is a complex site that, at least, goes back to the Late Bronze Age. The site is located on one of the highest points in the area and sits at an ancient crossroads that would have put it at the centre of traffic, trade, and (ultimately) power. The site itself appear to have started off as a large enclosure defied by a bank and ditch (Hill Fort), with a later ringfort built on top in the Early Medieval period. Away from the main site, on the southern tip of this north-south running hill, is a beautiful ring barrow of Bronze Age or Iron Age date. Between the two is a roughly triangular mound, thought to be used for royal inaugurations. Excavations by the wonderful Richard Warner in the 1970s produced evidence of contacts with the wider world and demonstrate a trade in high value goods, including wine amphorae from the Roman world. Unfortunately, the findings haven't been fully published, but preliminary reports are available on the excavations.ie site [here]. Clogher is, of course, most famous for having several large underground passages and chambers, filled with loot chests, exploding walls, and the occasional illuminated manuscript ... or at least that's how Assassins' Creed Valhalla portrays the site [here].

This immersive video tour takes you from near the small car park at the end of the lane up to the site, along the western side of the Hill Fort and then up to the top of the enclosed area. Where once there was a high-status ringfort is now dominated by a galvinised animal feeder. It’s not quite Shelly’s Ozymandias, but it is a great example of ‘Look on my works, ye Mighty, and despair!’. From there we move out through the main entrance, past the triangular mound, and on to the beautifully preserved ring barrow.

Posted by Robert M Chapple at 3:46 PM No comments: