At the end of last year (2020) the Chapple Family were driving back to Belfast from a few days away in Fermanagh & Tyrone when we decided to stop off at Castlecaulfield to see the ruins of the Plantation period house there. The core of the standing structures were constructed on the orders of Sir Toby Caulfeild between 1611 and 1619 [Wiki]. The house was burnt down during the 1641 Rebellion and although it was re-inhabited and renovated, it was in ruins by the end of the century. Today it is a windblown, picturesque ruin that seems very popular with local walkers and strollers. Even in its current state, the sheer size of the ruins gives an impression of its former opulence and grandeur.

Naomi Carver and Colm Donnelly's report on the 2011 excavations at the site note [here]:

Its original plan would have consisted of a main block with two wings, U-shaped in plan, and with a gatehouse at the north-western corner. The manor-house was originally three stories high, with attics and cellars. It was built of locally-quarried limestone, with decorative four-light windows of dressed sandstone. The gatehouse was of different construction - a low, squat building constructed from large blocks of darker stone (possibly basalt). It comprised two ground floor rooms on either side of a vaulted passage-way. The north-western room had a circular tower built into it. There were probably also rooms above. The Caulfield coat of arms was installed above the entrance to the passage-way but this may have been reused from an earlier building. 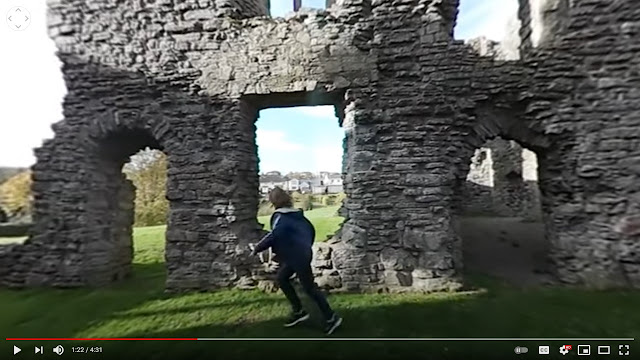 This is a gorgeous and under-visited site that is well worth your time to divert off the beaten path and explore. If you can't take my word for it, listen to the words of Joanne135 who left a 1-star review on TripAdvisor. She says that 'The castle ruins are fine' ... and there you have it!

You can view this immersive 360 degree video on an ordinary browser or on the dedicated YouTube app for your smartphone. However, for best results we recommend the more immersive experience that comes with an Oculus/Google Cardboard headset. Please feel free to Like and Share the video and Subscribe to the Archaeology 360 channel. If you’re feeling peculiarly generous and wish to help purchase snacks to sustain the Chapples Minor in the field, please drop something in the Tip Jar on the top right of this page.

Posted by Robert M Chapple at 7:30 PM No comments: