These are two sentences that on first analysis don’t fit particularly well together. At least, until recently, I didn’t think they did, but they do.

Perhaps I should be more specific.
I had cancer.
Past tense.

Earlier this summer I underwent a small procedure to excise a lesion from my forehead. The biopsy confirmed that I had squamous cell carcinoma. It’s gone now, but it might be back. While I won’t require chemotherapy or radiotherapy, I will be under intense monitoring for at least the next year.

As cancers go, this isn’t a bad one to have. It could have been so much worse. I really am very lucky.

It all started about a year ago when I got a spot on my forehead. Not a big deal! … except that it didn’t heal up. I realised that this was my fault – I kept picking at it. Not deliberately of course but I’d frequently find that, despite my best efforts, I’d have picked at it in a distracted moment and there I was – back to square one. It wasn’t healing and it was getting bigger. I spoke to my GP about it and they made some concerned noises and prescribed some cream, suggesting that if things didn’t improve I might need to see a specialist.

Things didn’t improve. The cream didn’t work. The spot grew larger. I didn’t go back to my GP. I grew my fringe out to cover it up.

When I did go back to the GP it was to mention it almost as an afterthought at a consultation for one of my children. By that stage, I had to lift up a big, shaggy fringe so she could examine it. I declined the GP’s (a different one from before) offer of a prescription for some more cream. Well, things moved pretty quickly after that. There was the consultation with the dermatologist. They started the ball rolling with a simple question: “Is there a history of cancer in your family?”. I’d been expecting something along the lines of “have you been picking at this?”, but the barrage of questions all revolved around cancer. Did I enjoy beach holidays? Did I use tanning salons?

Me? In a tanning salon? I’ve been called Orange before, just not in that sense.

The questions continued and the response to my stammered ‘So, you think this is cancerous?’ was a definite ‘Yes, but we need to understand how bad it is’. While I have nothing but respect for the specialist’s medical knowledge and ability, their suggestion to ‘prepare for every inevitability’ was, perhaps, not as helpful as they had intended. There was another session for the excision (the smell of my own cauterising flesh is not nearly as delicious as I might have hoped).

And then there was the wait for the results.

In preparing this piece I’ve made several attempts at describing what it was like, but I just can’t do justice to the swings from terror to optimism and back again, seemingly forever, waiting for an unseen and unknown enemy to advance into view and attack. It took a couple of rather hellish weeks, but the enemy did show itself and was much more manageable than I had feared. Today, I’ve got a sizeable divot in my forehead, decorated with stitch marks that, in the right light, look quite ‘Frankensteinesque’. I can live with it. I’m not totally out of the woods, but I’m getting there.

But here’s the thing … my story with this cancer didn’t start ‘about a year ago’. As the cancer.org site notes that although there may be a complex set of reasons why these develop “Most basal cell and squamous cell skin cancers are caused by repeated and unprotected skin exposure to ultraviolet (UV) rays from sunlight, as well as from man-made sources such as tanning beds.” Although we can probably rule out sunbeds as a factor in my case, the contribution of two decades as a field archaeologist are somewhat harder to dismiss. I had long believed that the combination of near mandatory use of hard hats, frequently poor weather, and my personal preference for the shade made me an unlikely candidate for this form of affliction. Turns out I was wrong. Turns out that my delay in seeking treatment significantly increased my risk of the cancer spreading to my lymphatic system. Thankfully, that hasn’t happened.

I really am very lucky.

My point in writing this is not to elicit sympathy. I’ve had brilliant support from my family, colleagues, and various close friends I’ve burdened with my story. I’ve received excellent care from remarkable professionals. I’ve no complaints on any of these counts. Instead, I want to acknowledge that cancer isn’t something (in my experience, at least) we talk about all that often in field archaeology.

Try bringing it up in conversation in the site hut – talk about it. Talk about how to lower your risk. Talk about the signs to look for. Talk about seeking treatment in time. If you’re reading this and you have any lumps or bumps that shouldn’t be there or just a spot that persistently won’t heal – don’t delay. Go see your doctor immediately.

I had cancer.
I’m very lucky.

You can be lucky too.

Note
The title of this post is a play on Henry Miller’s 1934 novel ‘Tropic of Cancer’, but, of course, you knew that.

I’d like to mention that while I love and cherish the NHS, I also have private medical care provided through my current employer. That private insurance allowed me to see the specialists I needed and receive the care I required in a very short space of time. I’m also very much aware that, had I remained in field archaeology, I would have been unlikely to have had such a benefit as part of my basic employment package. Just like the issue of low wages, the quality of employment benefits for archaeologists will only change through collective action. Go join a union today – your life might really depend on it!
Posted by Robert M Chapple at 8:01 AM No comments:

The British Museum holds 17 items identified as coming from Co Mayo along with one listed as coming from Galway/Mayo. The majority of these (15) are assigned to the Bronze Age. The most common object types are musical horns and pins (four each). All 18 artefacts are made of Metal. 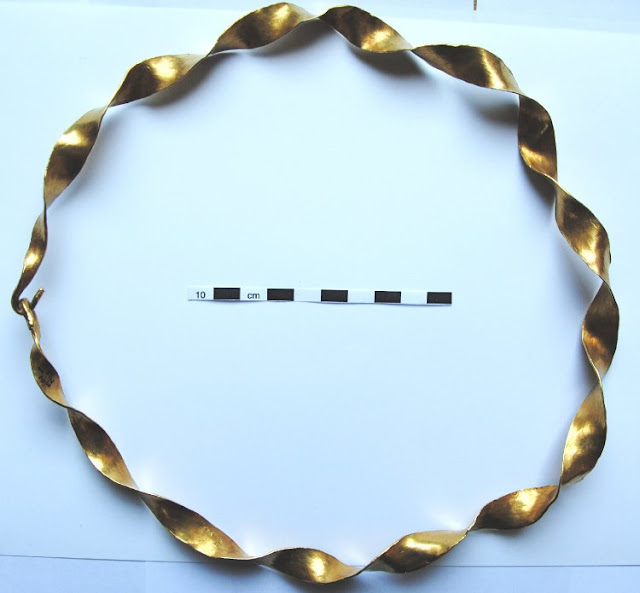 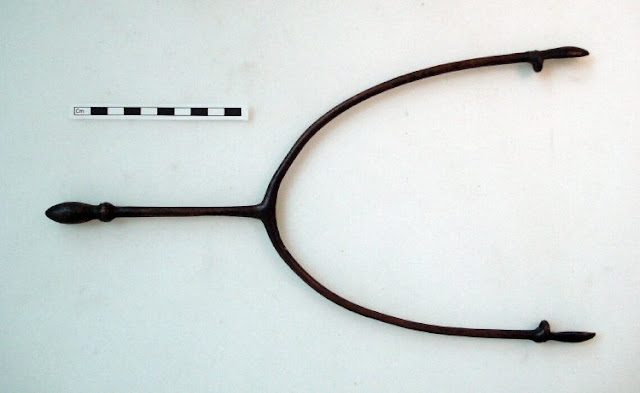 The following item is listed in the museum catalogue as coming from either Mayo or Galway:
Bronze Age: Metal item
Galway/Mayo
flat axe
19511103.100
Copper-alloy flat axe; with a thin, narrow, rounded butt.
http://britishmuseum.org/research/collection_online/collection_object_details.aspx?objectId=807176&partId=1 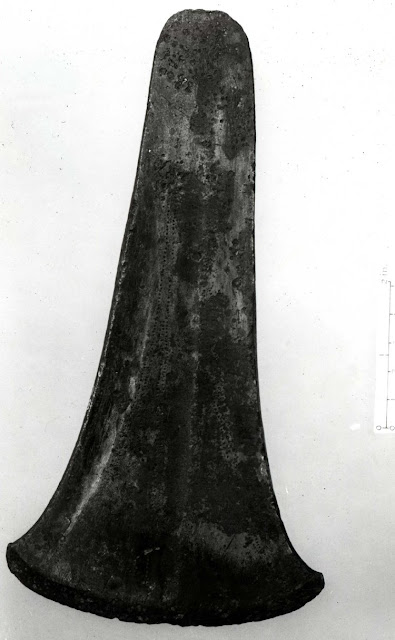 < Table of Contents
Posted by Robert M Chapple at 7:27 AM No comments:

Into the West: Errigal Keerogue Church The next place on my itinerary wasn’t too far from Knockmany … at least once I’d gotten myself un-lost and back on the main road. I’ve visited Errigal Keerogue Church a few times over the years and it always draws me back. The first time I was taken there I was in the company of the wonderful Chris Lynn, driving back from a Historic Monuments Council meeting. I always enjoyed being in Chris’s company - it was inevitably both a pleasure and an education. On this occasion he was talking about the Clogher valley landscape and a number of his experiences and adventures therein when he mentioned Errigal Keerogue. Had I been there, he asked? Er … no … no I’d not. To be honest, I’d not even heard of it, much less had it on a personal archaeological ‘bucket list’, but I wasn’t going to mention that bit. With that he eased the car onto a side road and after only a few minutes we were parking up in front of a seemingly rather ordinary ruin of a medieval church. Except that it’s not all that ordinary and I was treated to an excellent tour of the site. 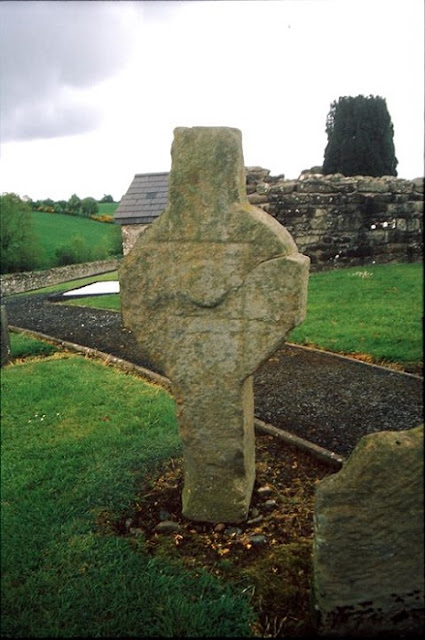 Believed to have been founded in the 6th century, the Annals of Ulster make reference to the site on a number of occasions, going back to the early 9th century. The present church was later and appears to be the same structure that was destroyed in 1380. The site is renowned in archaeological circles for the large number of broken rotary quern (grinding) stones that have been found there, some of which were reused in the church fabric. One of the suggestions was that their presence here indicates that the site was the focus for forced breakage of querns in an attempt to create a milling monopoly. While it wouldn’t be the only time that a church organisation attempted to seize public services, it is likely that the querns merely represent the reuse of the most durable materials from the earlier history of the site. 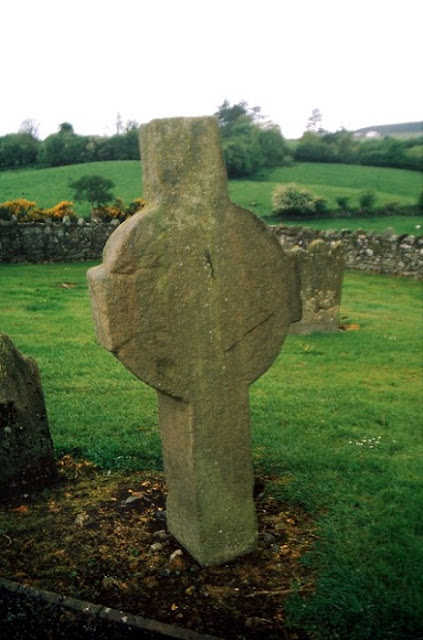 While the location is really spectacular, giving great views out over the surrounding landscape, the attraction here is the high cross. This large cross with a circular head has been described as ‘primitive’ and ‘archaic’, but it appears that it was actually never finished as the stone contains a major flaw. While I do love a well-made high cross with all the interlace and figure carving, I particularly like this one because it allows us to ‘glimpse behind the curtain’ at how the sculptor worked. If you looked closely at the west face of the cross, you can see that it is marked out with carving guidelines and that work on the central boss on had commenced. On the opposite, east, face lightly incised lines marking out the shape of the ring-head are visible. 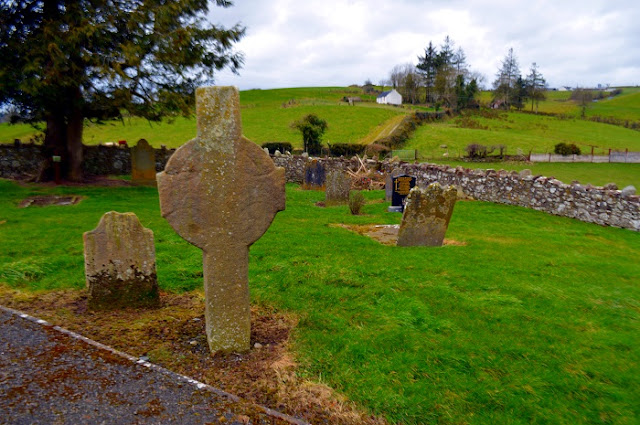 The other thing that’s worth a visit is the unusual medieval carved stone known from the site (a replica is visible on site, the original is in the keeping of the DoE). It is a much worn carving in low relief that is interpreted as a depiction of a knight, dating to (at latest) the 14th century. The space where the face should be is a recessed depression, suggesting that the facial features were created separately, perhaps in another medium like wood alabaster, metal etc., and are now lost.

Again, after an all too brief moment to survey the landscape, it was time to make my way back to the car and take up my journey once again.
Notes:
If you go to the Northern Ireland Sites and Monuments Record [here] you can search for the site as TYR 059:006. The scanned contents of the NIEA’s SM7 file on the site is available [here]. 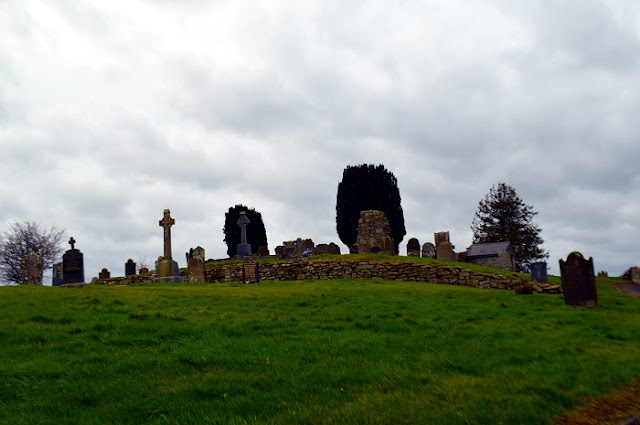 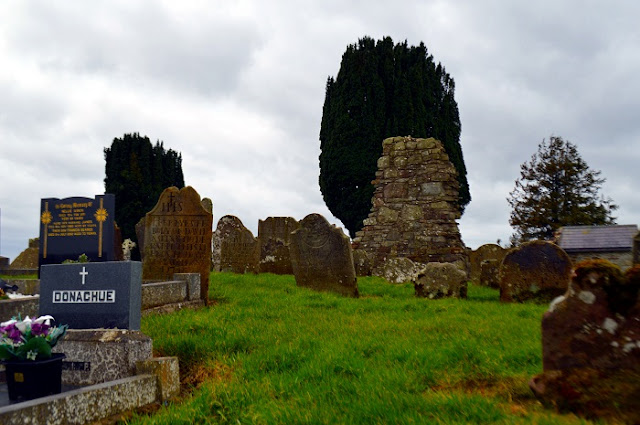 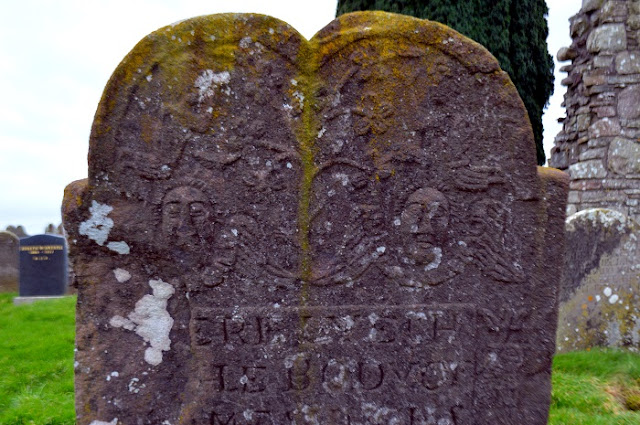 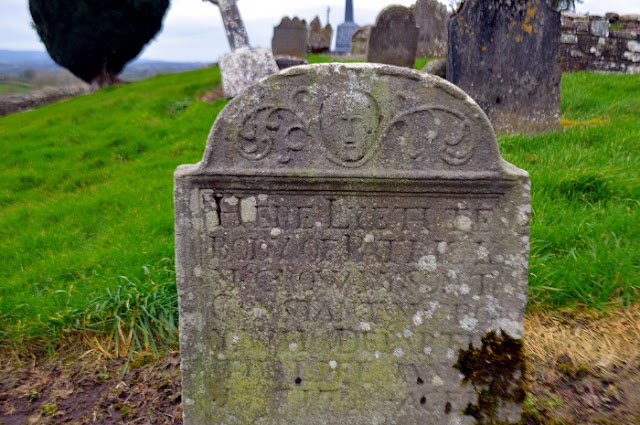 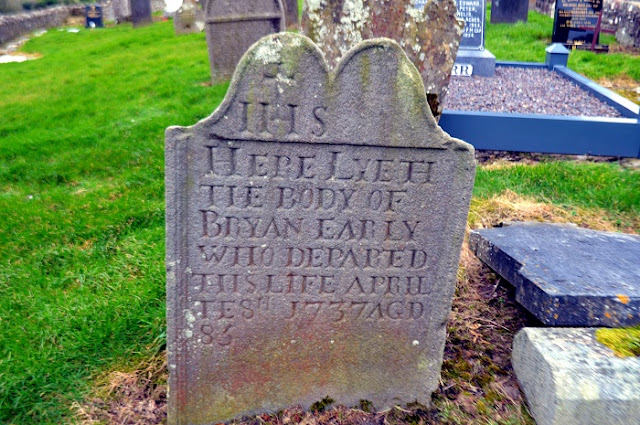 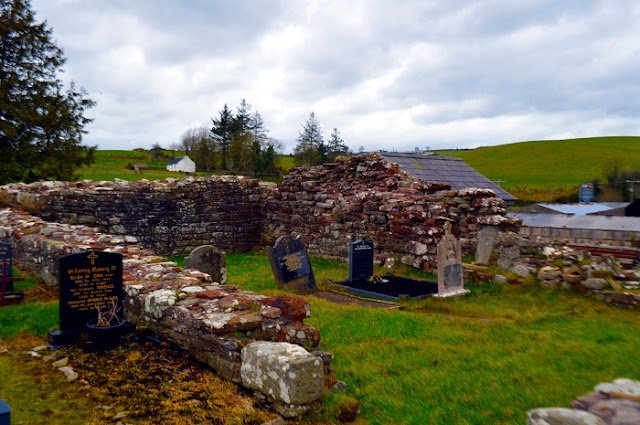 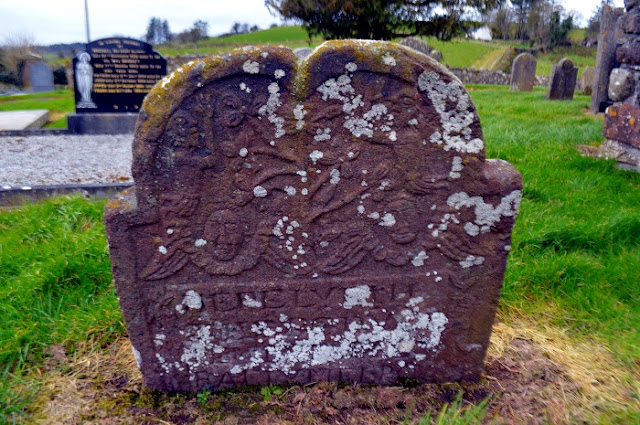 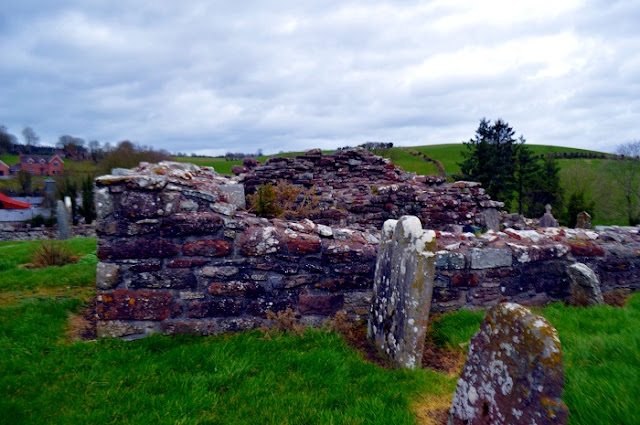 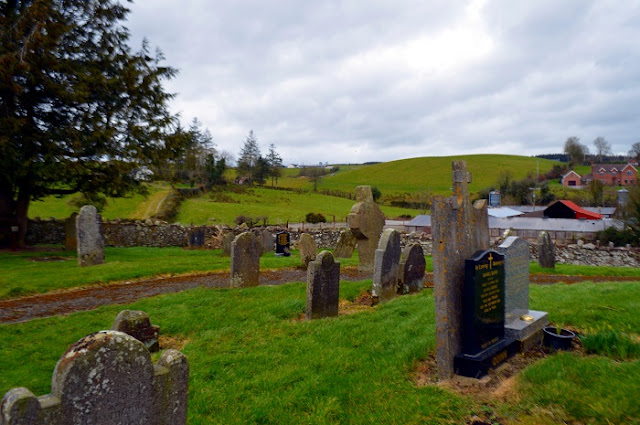 Posted by Robert M Chapple at 10:52 AM No comments: 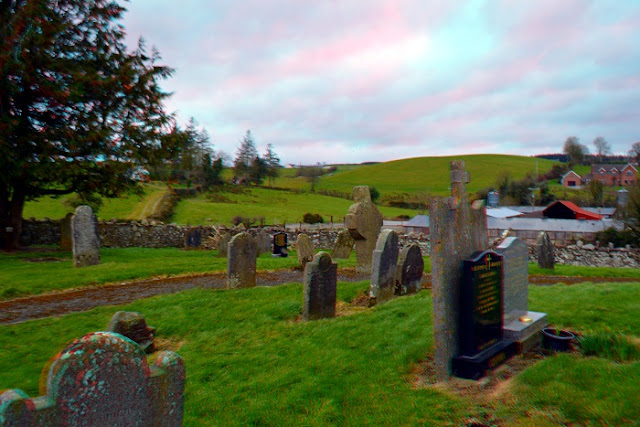 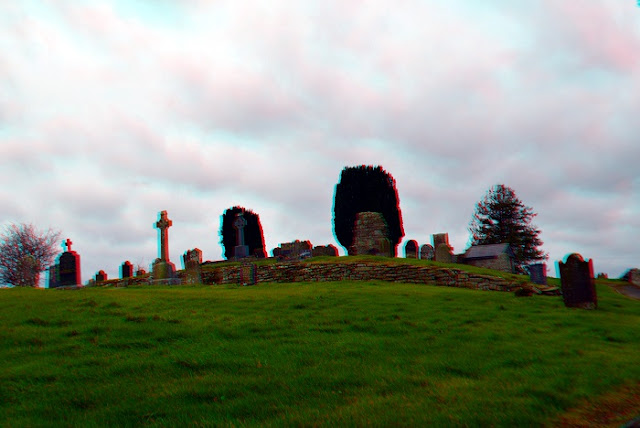 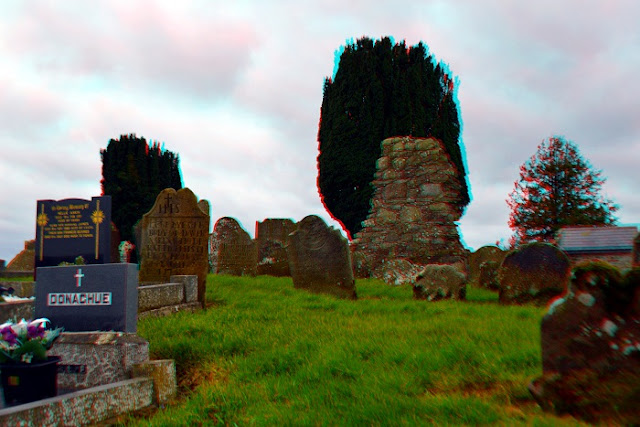 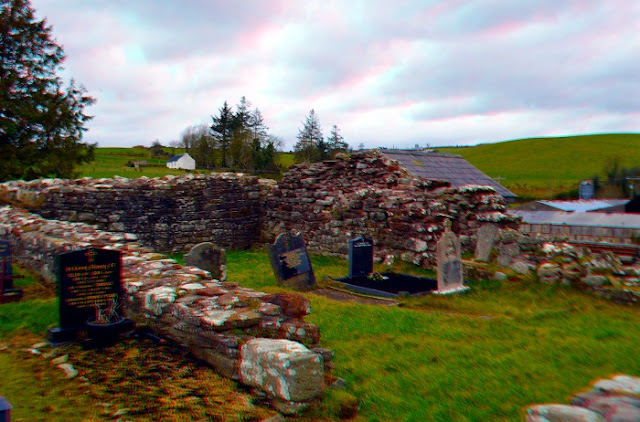 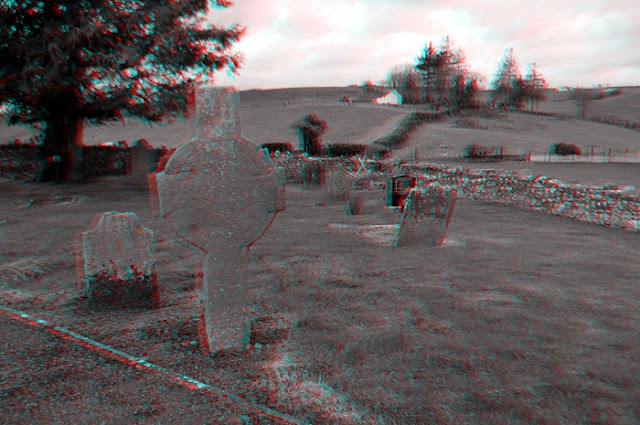 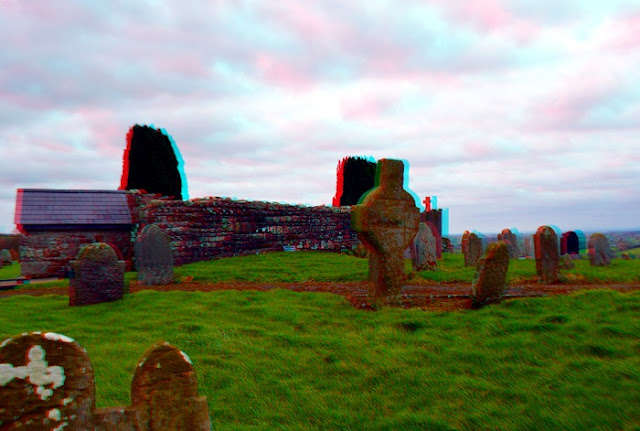 < Back to Main Post < Table of Contents
Posted by Robert M Chapple at 10:51 AM No comments:

The British Museum holds six items identified as coming from Co Cavan. The majority of these are assigned to the Early Medieval and Late Neolithic/Early Bronze Age (2 each), followed by the Early Medieval period (2). Only two material types are represented in this assemblage: Metal (4) and Stone (2). 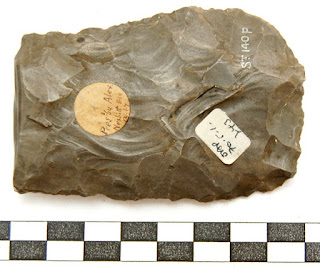 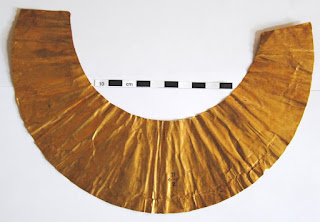 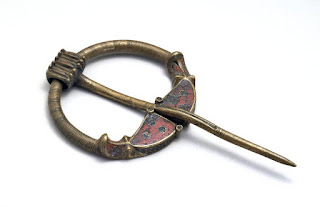 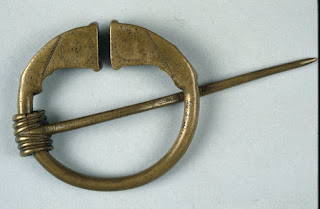 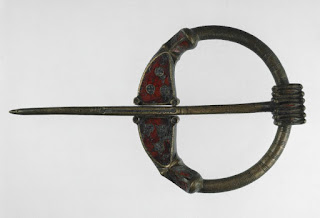 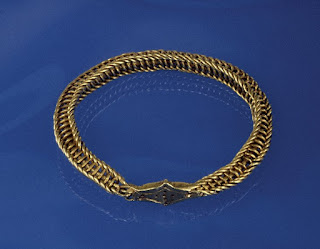 < Table of Contents
Posted by Robert M Chapple at 9:59 AM No comments: