In this, the concluding piece from the Chapple Family’s sojourn in the wonderful county of Donegal, we stopped off at Rathmullan Priory. I would point out that we only got there by accident – we never actually intended to go. We been staying in Buncrana and had decided to head further west to my old stomping grounds around Dunfanaghy and Portnablagh. As I detailed in my previous post [here], I’d managed to escape the clutches of my beach-loving family and spend some time wandering around the secluded ruins of Doe Castle. Well, by the time I returned from the castle, everyone was pretty much exhausted from playing on the beach. We slowly packed up, made our way back to the car, turned on the GPS and headed for home. A well-prepared, thoughtful driver would have been aware of the GPS settings and, perhaps, plotted some way points to ensure that the correct route was followed. I, on the other hand, simply turned it on, set the address for Buncrana and trusted to whatever small gods exist between the lines of code of the GPS algorithm. This is why, about the time I was thinking to myself ‘shouldn’t we have been through Letterkenny by now?’, we found ourselves instead approaching the village of Rathmullan. To our unexpected delight we found that we weren’t too far from our accommodation, at least not ‘as the crow flies’, and that the last leg would be accomplished on a remarkably scenic ferry crossing. How better to spend the time waiting than explore around the ruins of this gorgeous abbey? 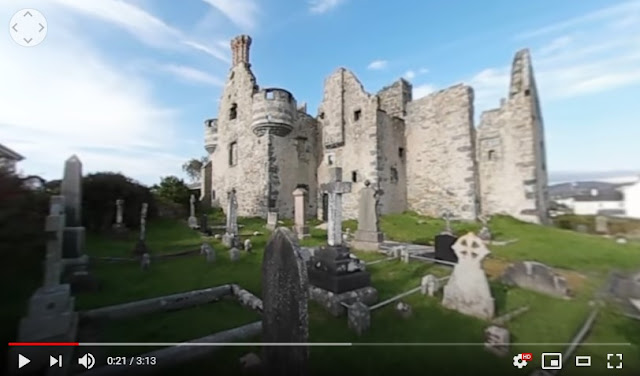 Wikipedia tells us [here] that the site was first constructed by Eoghan Rua MacSweeney in 1516 as a Carmelite Friary. It appears to have been inhabited as late as the early 19th century when Bishop Knox, in fear of a French invasion, had it fortified. Unfortunately, when we visited the interior was locked up, limiting our opportunities to explore. All the more reason to come back, I think.

Posted by Robert M Chapple at 9:29 AM No comments:

In the previous instalment to this series of 360-degree video posts I took you to see the remains of the Early Medieval house at Rinnaraw [here]. The back story to this was that I’d left the rest of the family on the beach at Portnablagh and walked back to Rinnaraw on my own. Partly, this was because I didn’t think they’d be all that interested in such an apparently ‘slight’ monument that would require trudging across a field to go see. The other part was that I felt the visit should be a solo encounter with the site and an opportunity for personal reflection and meditation, which is hard to achieve when each of the Chapples Minor are trying to throw the other off the edge of the precipice. All went well. I completed my filming and ruminations in perfect peace and eventually dandered back to where the rest of the family were on the beach. I had hoped that all would have run through their fascination with sand and seawater by now and we’d soon be on our way to see more archaeology. Turns out the Chapples Minor had other ideas. They actually like beaches and the sand and the water and all that awful stuff and they, if you don’t mind, would very much like to stay. I, I am afraid to say, greeted this with all the maturity and grace of the Elder Statesman of the profession on this island that I clearly am, and confined my rebuttals to heavy exasperated sighing and dramatic eye-rolls. My wife, ever the peacemaker, suggested that I might like … you know … to go see some archaeology … on my own … where I wasn’t being an egregious knob to our offspring. Like one of those cartoon characters that move so fast they leave a dust outline in the air long after they’ve sped away, I didn’t need to be asked twice and was on my way up the beach and back to the car in a twinkling. Not so long after that I was making my way through the tangle of back roads that eventually lead to Doe Castle.

The earliest parts of castle are probably of 15th century day and were constructed by members of the O’Donnell family, before (sometime in the 1440s) falling into the possession of what Wikipedia calls ‘the gallowgalss MacSweeny family’. It appears to have had a much-storied history before finally becoming a residence of the Vaughan Harts and was inhabited up until 1843. All this & more may be gleaned from the Wikipedia entry, including the fact that its most recent claim to fame is that ‘Irish singer Brian McFadden proposed to his (now ex-) wife, Kerry Katona, at the castle in 2001, it being the spot where his grandfather also had proposed to his grandmother’. So there’s that …

Personally, I had a great time at the castle and I do believe that the Chapples Minor missed out on a wonderful experience by not coming along. Either way, I returned to the embrace of my family on Portnablagh beach. I was happy and contented, having seen some great archaeology and they were happily exhausted from cavorting in the surf.

Posted by Robert M Chapple at 11:08 AM No comments:

Anyone following this series of posts will be aware that most concentrate on relatively well known and accessible monuments, but for this one I'm taking a different approach. I’m going to be frank – there’s probably little reason to visit this site in person. It’s on no ‘must see’ list, nor does it come highly recommended in any guide book, but for all that, it’s special to me! This is Rinnaraw, a little Early Medieval house site, overlooking Sheephaven Bay. It is overgrown and quiet now, but it was excavated by Dr Tom Fanning from 1987 to 1992 [Reports Here | Final Publication] and was the scene of my very first archaeological excavation [Reminiscences Here]. 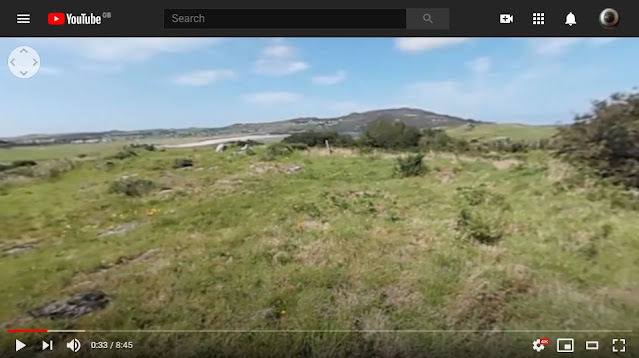 I worked there in 1989 and hadn’t been back since. Watching the images now, I’m immediately thrown back to the sounds and dedicated activity of over 30 years ago and it has given me a place to lightly meditate on my life and the passing years. I realise that very few reading this blog post will share these ancient memories, but I do hope it can provide a relatively quiet place for thoughtful reflection and the enjoyment of a little-known archaeological gem.

For this one I’ve stuck with the diegetic sound recorded on site, as opposed to covering it over with a musical piece. Unfortunately, that leaves quite a bit of wind in the microphone, but you can still hear the birdsong, the passing cars and even (I think) the distant sound of the waves breaking in the bay.

Posted by Robert M Chapple at 12:27 PM No comments:

As part of our Summer excursion to Donegal, I wanted to bring the family to see the incredible views from Horn Head. Back in 1989, when I was working at Tom Fanning's excavation at Rinnaraw, we used to walk out here of an evening. For the unwary, I would note that there are two different routes on this little jut of land. One brings you to this World War II lookout post with modest parking and spectacular views. The other fork in the road will bring you to equally gorgeous vistas, but will involve driving along a road that is literally terrifying - precipitous drops, no hard shoulder, and definitely zero space to allow two cars to pass. This is the route we took first and I'm not too proud to admit that I stayed in the car while the more adventurous members of the family walked about calmly outside like it was perfectly safe and I wasn't totally over reacting!

anyway, once we got on the right path, parked and got to the crest of this little rise, the whole of Horn Head was laid out before us - and what a view it was! The National Inventory of Architectural Heritage notes that this is one of an original 83 lookout posts that stretched 'from Ballagan Point in Louth to Inishowen Head in Donegal'. As you look out the windows on its north side, you can see the distant, crumbling remains of its forerunner, the Napoleonic period signal tower. Unfortunately, none of us felt sufficiently energetic to contemplate a trudge across the bog to visit it (the lure of the nearby beaches was too much for the Chapples Minor), but you can read all about it in Dr Stuart Rathbone's rather excellent research into Irish Signal Stations [here]. 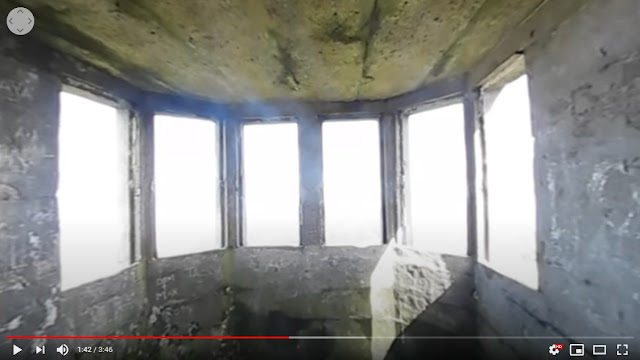