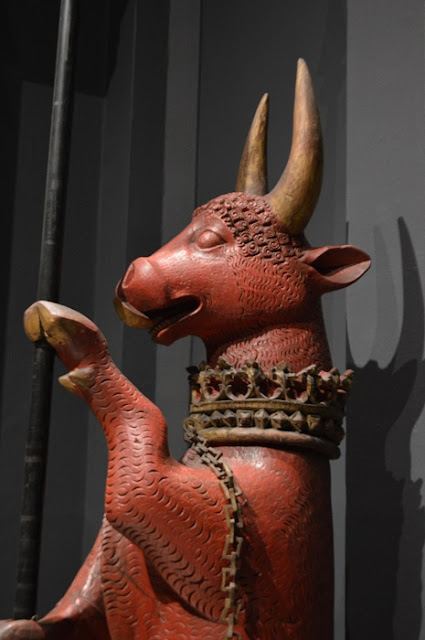 The Dacre Beasts are relative newcomers to my personal cultural horizon (read: I’ve only recently encountered them). They are believed to have been crafted between 1509 and 1547, during the reign of Henry VIII, probably for Thomas, Lord Dacre (1467-1525) or his son William, 3rd Baron Dacre (1493-1563). Interestingly, all four figures are believed to have been carved from a single oak tree. These, apparently, unique survivors of English heraldic woodwork were installed in the great hall at Naworth Castle in Cumbria, where they remained until purchased by the V&A in 2000 (in lieu of inheritance tax). The castle was ravaged by fire in 1844 and although the beasts survived unscathed, they were repainted soon after, possibly following the original colour scheme. The banners were added around 1849. 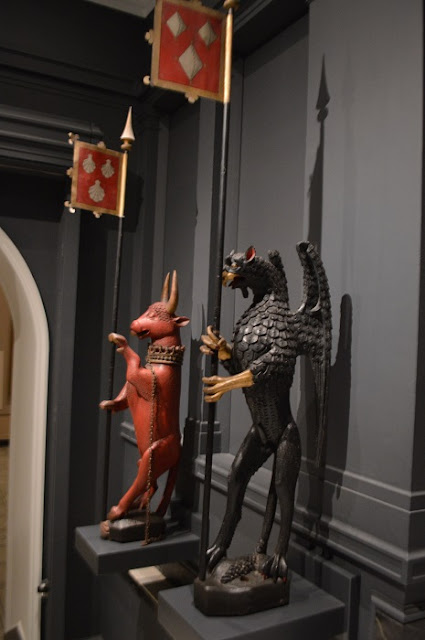 The beasts (each nearly 6ft tall) are intended to represent heraldic supporters of the Dacres and other families related to them through marriage. The beasts may be identified as follows:

The red bull was the heraldic supporter of Thomas, Lord Dacre
The crowned salmon represents Elizabeth de Greystoke (eloped with Dacre in 1488)
The black gryphon signifies Thomas’ ancestor Ralph or Ranulph de Dacres, who built Naworth in 1335
The white ram (even if it does look like a freshly-skinned calf) may be identified with Ranulph's wife, Margaret de Multon 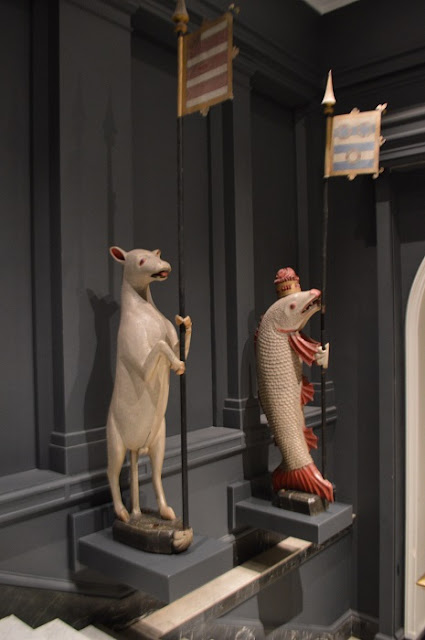 These are simply beautiful pieces, made all the more striking by their rarity. However, my lasting impression of these carvings is that the craftsperson responsible for their creation was a little too fascinated with penises and testicles. I suppose it’s a consequence of attempting to retain some degree of naturalism while standing a quadraped on its hind legs that there will, invariably, be genitalia on display. Although Thomas Dacre’s red bull may be in with a chance of a prize in the ‘largest knackers (asymmetrical) in medieval carving’ category, the black gryphon’s very 3D member and testes is not only slightly unnecessary, but in a whole league of its own. 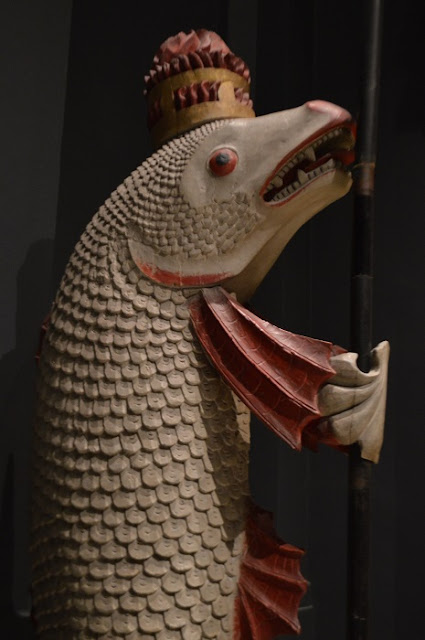 Notes
On the off-chance that archaeological blogs such as this are occasionally perused by those with an interest in statistics, I’ll note that is believed that Francis Galton came up with the concept of correlation at Naworth Castle. Of course, Galton is less heralded for his interest in eugenics. He is noted for actually inventing the term ‘eugenics’ itself as well as coining the phrase ‘nature versus nurture’.


Having obviously spent too long thinking about his red bull, I suddenly can't get the phrase ‘Lord Dacre gives you wiiiiings’ out of my head. You're welcome. 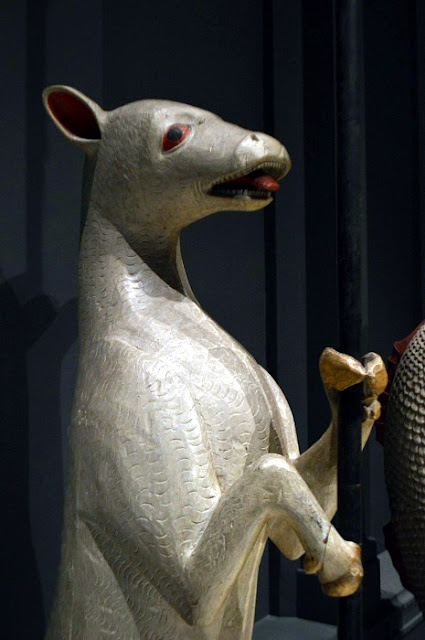 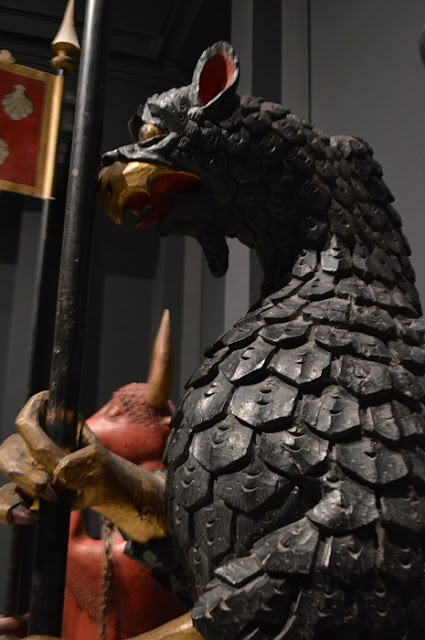 Posted by Robert M Chapple at 11:06 AM No comments: 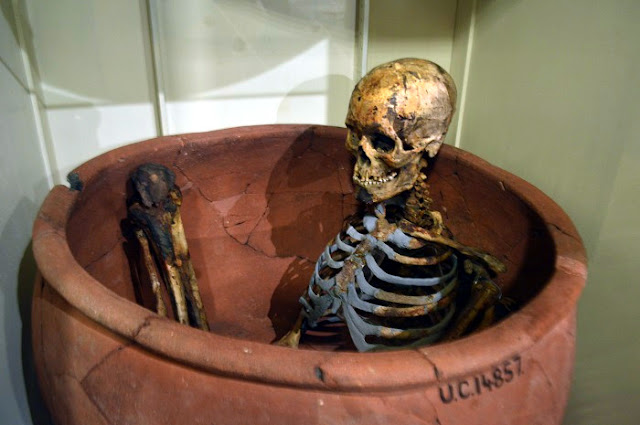 In an era where the display of human remains has become a contested issue, the presentation of this individual in his burial bowl is particularly arresting. This is the well-known Burial 59 from the pre-dynastic North Spur site at Hemamieh near Badari. The large red earthenware pot contained the deceased individual wrapped in a linen shroud, without grave goods, and was capped by a second, slightly smaller, bowl. The burial is one of a number that cut into the pre-dynastic domestic refuse mound and is tentatively dated to the Protodynastic/Old Kingdom periods.

I was particularly taken by the sign near the entrance of the museum that noted that there are human remains on display inside. This is contextualised in terms of how the collections are treated with respect and are the subjects of ongoing research ‘in order to return aspects of their individual identities’.
Posted by Robert M Chapple at 8:32 AM No comments:

Adoration of the Kings 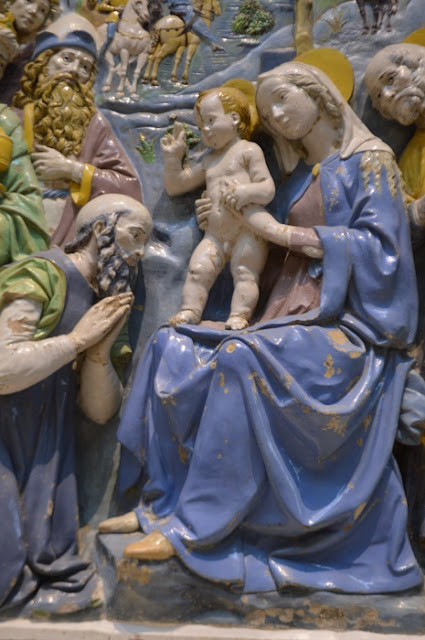 This altarpiece is made of enamelled terracotta and depicts the adoration of the Magi. It was made by the renowned Italian Renaissance sculptor, Andrea Della Robbia, in Florence and dates to around 1500-1510. The V&A’s database entry for this piece notes that the coat of arms on the lower border indicates that it was commissioned by the Albizzi family. It was most likely intended for an altar at either S Michele or S Andrea at Rovezzano, both of which were patronised by the Albizzi family at that time. 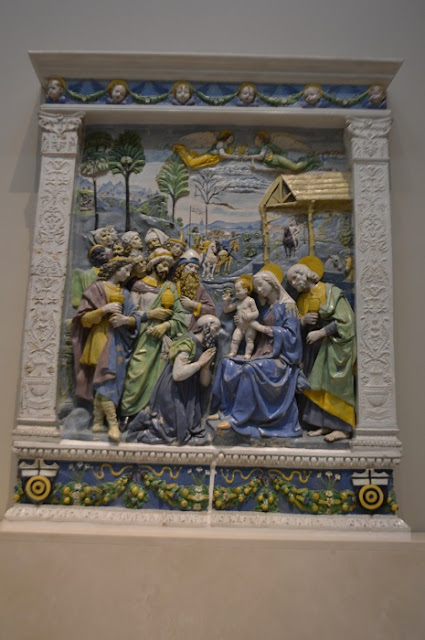 I’m always drawn to this piece for the simple, outlandish gaudiness of the colour scheme. I’m remarkably colour blind and loud colours don’t often resonate, but this thing just screams at me for attention (I can only imagine how gaudy it appears to modern viewers with full colour vision). I also have to admit that I have something of a soft spot for the Magi. Quite apart from the fact that I memorised the extra-Biblical names of the Magi (Balthasar of Arabia, Melchior of Persia, and Gaspar of India) when I was quite young (it came in useful in a Table Quiz once, so there!), I felt rather sorry for the ones we had in my family’s Christmas crib. You could set the whole thing up with the rest of the decorations, but not the Magi. They were only supposed to appear on the 5th of January, on the last day of Christmas … and then the whole lot had to be packed away for another year. It seemed rather unfair. I know they turned up late, but a few hours in the spotlight before being put away for another 12 months didn’t sit well with me. Here, on the other hand, the Magi got to be centre stage all year round … no matter how gaudy the choice of colours!
Posted by Robert M Chapple at 7:39 AM No comments:

Archaeological Archives for Sale! Buy it or bin it!

Collection Only. Sold as is. No Time-wasters.

Offered: The surviving archives of six archaeological sites excavated between July 2000 and February 2002 on the Northern Motorway, near Drogheda, Co. Louth and on the Airport-Balbriggan Bypass, Co. Dublin.

As there is little chance that any of this material will ever be published, I have taken the difficult decision to put these archives on the open market to recoup some of the costs of storage incurred in keeping them safe for the best part of two decades.

The archives are composed of the majority of the excavated finds, charcoal from sieved samples, permatrace field drawings, photographic archive, and the incomplete final reports for three sites. The latter include some (but not all) of the specialist reports necessary to bring the sites to completion. In particular, there are no radiocarbon dates available for all but one site. Given the age of the excavations and how much scholarship has moved on in the intervening years, the written interpretations and conclusions are likely to be wildly out of date and in need of a complete reassessment.

Offer will remain open until July 11 2019, after which time the digital archives will be deleted and all physical materials either dumped or sorted for pieces which may be sold individually.

Balgatheran 1 (00E0477), Co. Louth, was a multi-period site that produced evidence from various eras, including the prehistoric, Early Christian, and medieval. The most significant features uncovered were all of Early Christian date and included a large ditch, a possible workshop, and a cereal drying kiln. It was excavated from 11 July 20 November 2000. [Excavations.ie | Preliminary Report: Part I, Part II, Part III]

Mell 2 (00E0430), Co. Louth, was an interesting combination of a ring-ditch and a unique form of elongated ditched enclosure. The lower fills of the ditched enclosure were sterile redeposited natural, but the upper layers were rich in charcoal, fire-cracked stone, and cremated bone of both human and animal origin. It was excavated from 23 February to 11 May 2001. [Excavations.ie | Preliminary Report]

Tullyallen 1 (00E0429), Co. Louth, was a large ring barrow with a central cremation burial. It was excavated from 4 December 2000 to 21 February 2001. The central burial was raised in a block for off-site excavation and conservation, and is not part of the archive. [Excavations.ie | Preliminary Report]

Ballough 17 (02E0078), Co. Dublin, was a collection of prehistoric pits and a Medieval field ditch. The site was excavated between 14 January and 26 February 2002. [Excavations.ie | Preliminary Report]

Newtown-Monasterboice 4
3 pieces of flint – 1 each of a scraper, a piece of débitage, and a piece of struck flint
1 burnt stone
1 piece of ferrous slag

Ballough 23 **
Mostly flint, with some pottery (mostly medieval, but occasional pieces of prehistoric pottery too) as well as both burnt & unburnt bone

The serious point underlying this post is that a large number of archaeological archives are retained by excavation directors, frequently long after the expiration of any chance of funding for publication, or even after the liquidation of the commissioning Consultancies. The government bodies charged with the care of these cultural resources are overstretched and under-resourced and have relied on the good will and kindness of individual archaeologists to curate and preserve these archives. Inevitably, as this generation of field archaeologists age, retire, and expire, these archives are placed in peril. Some spouse, partner, or colleague may make an attempt to see that any archives residing under the eaves are passed on to the licencing authorities or some other group or individual. However, I believe that the majority will be dumped by relatives looking to clear house and that many of these archives will simply end up in landfill.

It’ll happen quietly.
There will be no ceremony or public outcry.
Perhaps the occasional researcher or student will wonder ‘whatever happened to the finds from X?’.
The few that do know the story will sigh and shrug their shoulders.
Archives lost.
Knowledge erased.
Our shared cultural heritage eroded.
It’s not really a big deal, is it?


It's common knowledge in field archaeology that this happens. It's also common that we don't say much about it or cause a fuss. Frequently, this is because individuals are keen not to compromise their careers by making waves. Some may hold out the hope (however forlorn) that one day there will be funding. Maybe they'll find the time to tackle it in retirement. Undoubtedly, all of us have a love of the archives we've helped create and want to see the best for them. I too, at various times, have belonged to all of these categories. The difference in this instance is that I’m standing up and saying that I’ve had enough of providing free curation. Instead, I’m setting a remarkably reasonable price for almost two decades of storage. I’m also setting a deadline for when that material will be disposed of. If it’s important and you want it, it’s time to pay for it. Either way, it's time to stop relying on private individuals to keep this material in long term storage on behalf of companies and institutions that do not appear to care.


Notes
* These are illustrative only, as some materials may have become separated from the archives and ended up in storage elsewhere, lost, or dumped.