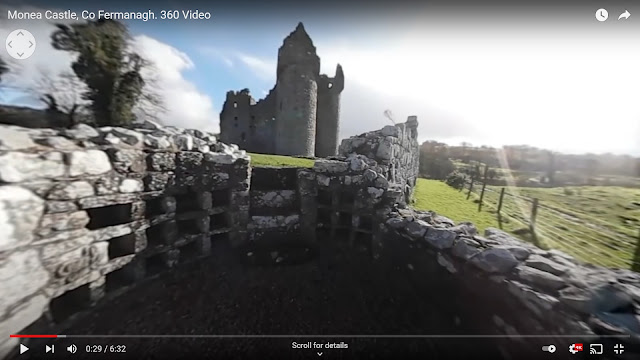 Monea castle is one of Northern Ireland's iconic castles. It lies in gently undulating countryside, about 4 km to the west of Lough Erne. The major building work of the castle was carried out between 1616 and 1618. However, a Survey of 1619 noted that it was 'a strong Castle of Lime & Stone, being 54ft long & 20ft broad; but hath no Bawne unto it'. This 'Bawn', or outer defensive wall, was not completed until 1622. Its designer and first owner was Scotsman, Malcolm Hamilton, who started off as the Rector of Devenish, before being appointed Chancellor of Down in 1612. Things clearly went well for him as he was made archbishop of Cashel in 1623. But not too well, as Wikipedia records that in 1629 he 'died of an unknown infectious disease', which seems somehow unsettling ... but mostly for Malcolm! The subsequent history of the site has it passing back & forth between Irish and Colonist control for much of the 17th century. It appears to have burnt down some time in the 18th century and was never re-inhabited. The NI SMR page describes the castle as 'oblong in plan, 3 storeys high. From the angle of the W end rise 2 semi-cylindrical towers with box-like turrets. Both have spiral staircases.' What this description doesn't convey - and is not immediately apparent on the ground - is how much like a penis and testicles this castle is in plan. There's always something vaguely phallic about a vertical stone castle thrusting up from the earth, but this one gets you coming and going (as it were). I'm not suggesting that castle architecture would have taken a more 'vaginal' turn had the European Medieval period had taken place in the context of a matriarchy, but it totally would!

No matter how 'penisy' you like your castles, this is a great day out - gorgeous standing stonework, iconic stepped turrets in the Scottish style, delightful vistas in all directions. There's not much to find fault with ... unless you're the Triadvisor user 'Melissa' who seems to have had a poor experience owing to a lack of understanding that the site is on a working farm and that there is no automatic right of way to the castle, as is clearly noted on the Discover Northern Ireland website [here]. On the other hand Tripadvisor user 'Gajosinskas' reckoned that there wasn't much of a castle left and it was too far out into the countryside in any case. As 'Gajosinskas' says: 'If you like to look at old walls and foundations - must see place'.

There has been some limited excavation on the site and a programme of geophysics. During this work a number of artefacts were recovered,  including a porcellinite axehead of Neolithic date. The NI SMR page notes that the axe had been deliberately set in the notch of a large stone, 'suggesting that this axe had been purposely placed in this nook and curated at the post-medieval castle.' I like this idea for a number of reasons, not least of which are the thoughts that this is not the first activity on this site and also that it reminds us that people in the past also found, recognised, and cared for archaeological artefacts.

You can view this 360-degree video on an ordinary browser or on the dedicated YouTube app for your smartphone. However, for best results we recommend the more immersive experience that comes with an Oculus/Google Cardboard headset. Please feel free to Like and Share the video and Subscribe to the Archaeology 360 channel. If you’re feeling peculiarly generous and wish to help purchase snacks to sustain the Chapples Minor in the field, please drop something in the Tip Jar on the top right of this page.

Posted by Robert M Chapple at 5:47 PM No comments: