[** If you like this post, please make a donation to the IR&DD project using the secure button at the right. If you think it is interesting or useful, please re-share via Facebook, Google+, Twitter etc. To help keep the site in operation, please use the amazon search portal at the right - each purchase earns a small amount of advertising revenue **]

In Part I of this post I set out how I, in the face of overwhelming non enthusiasm from my children, went out and enjoyed two beautiful buildings (Netherleigh House & The Strand Arts Centre [Website | Facebook]) as part of European Heritage Open Days 2013. That day (Saturday 14th September) had been warm and sunny – a last Hurrah for the late summer. The Sunday was not the same at all. It was wet, windy, overcast, and pretty miserable. My children – wonderful though they are – were putting up some stiff resistance to the idea of going out and about to visit some dreary old buildings. My lovely, patient, and hard-working wife had to go and toil for a couple of hours that morning, leaving me in charge of the Chapples Minors. As she left she offered an opinion that I might – despite my best efforts – find it difficult to get them out of the house on such a miserable day. I, however, had other plans! I promised my kids bacon sandwiches if they’d come and sit with me while we decided where to go and what to see. I explained that we were going out and we were going to see some buildings … the only difference was that in one scenario they’d be dragged kicking and screaming and they’d have no choice in where we went, but in the other version of reality they’d have an input into what we’d see … and a bacon sandwich. After a brief, brotherly head-to-head, my offer was accepted and I went about producing sandwiches and finding the online brochure. After all that bargaining and deliberation it turned out that there were only two buildings in East Belfast open for EHOD 2013 … but at least there was a feeling that we’d gotten to the decision together. There was consensus, but most of all there was bacon!


First on our list of places to see was Campbell College. If you went to a boarding school you probably have no time for such places as Campbell. On the other hand, I went to Athenry Vocational School and dreamed of being transported to a place like this … or at least the version of that made its way into my boyhood novels that probably included a lot more adventure, daring, ginger beer, and Nazis appearing from U-boats off the coast than might otherwise be expected. All that said, there’s still part of me that’s fascinated by these places … and subconsciously probably a bit relieved that I didn’t actually go there! In 1890 the trustees of Henry James Campbell’s estate purchased the Belmont Estate from Sir Thomas McClure. Campbell had made his fortune through the linen trade (including Mossley Mills), and on his death in 1889, left the bulk of his estate to fund either a school or a hospital to bear his name. The school was designed in the Tudor Revival style by local architect William Henry Lynn (and probable architect of the nearby Netherleigh House). Lynn and James Adam McNeill (joint headmaster 1890-96, headmaster 1896-1907) visited a number of schools in the UK and on the Continent to collect the most modern thinking then current in education and to provide ‘a liberal curriculum on sound educational lines’. In the Entrance hall the chandelier and clock were brought from Lorne, the Craigavad home of Henry James Campbell. The chandelier was originally gas, but was converted to electricity in 1923. Unfortunately, the original clock was stolen but its replacement is known as the ‘Albert Clock’ in memory of long-serving porter Albert Maxwell,BEM.

Some 594 Campbellians served during World War One. Of these 126 were killed, including thirteen on the first day of the Battle of the Somme in 1916. The war memorial in the Central Hall was inaugurated in 1923 and features sculptures by esteemed local artist, Rosamund Praeger (sister to naturalist and writer Robert Lloyd Praeger). The same memorial includes a somewhat unexpected name: C S Lewis. Like many, I would associate Lewis with the Narnia tales and a somewhat tempestuous relationship with J R R Tolkien. I hadn’t realised that Lewis had attended Campbell for all of two months before being sent to Malvern (Cherbourg School). In 1917 he was commissioned into the Third Battalion of the Somerset LightInfantry and experienced trench warfare first hand in the Somme. In April 1918 he was wounded as a result of what is now termed ‘friendly fire’ when a British shell fell short of its target. He survived and, although only very briefly a Campbellian, was accorded commemoration on the memorial. There can’t be a gas lamp post in east Belfast that hasn’t been claimed as the inspiration for the one that makes an appearance in The Lion, the Witch and the Wardrobe. The one surviving example on the Grounds at Campbell is no exception, however tenuous the link. 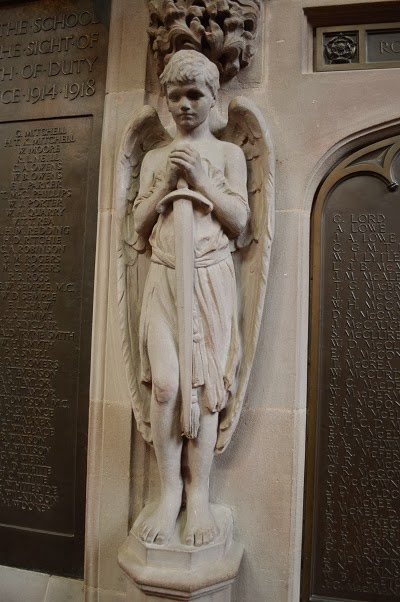 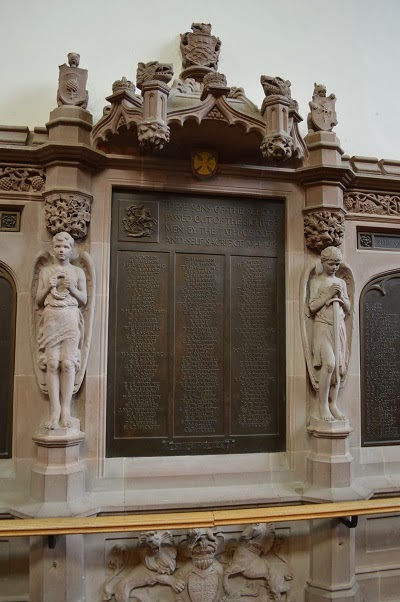 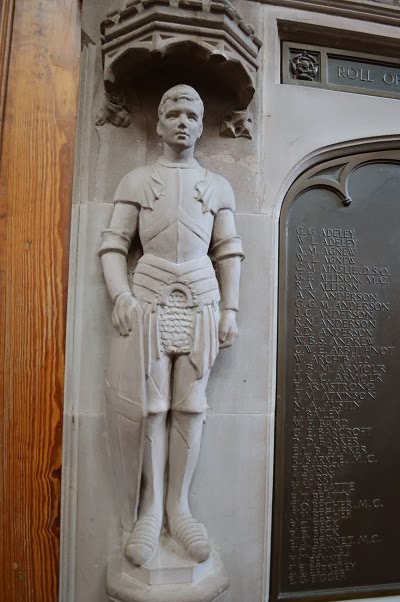 Over 1000 Campbellians served during WWII, claiming the lives of 102 of them. The monument to the victims of that conflict is much more sedate and would almost escape casual notice amidst the wood panelling. Outside the building, our stalwart tour guide introduced us to two items he described as ‘marmite’ features of the school – you either love them or hate them. The first of these is the brace of boar that guard the entrance. These are identical copies of the well-known Il Porcellino sculpture (occasionally termed ‘the Florentine boar’). The original – now lost – was an Hellenistic statue found in Rome and, in the mid-16th century, transported to Florence on the instruction of the Medici family. During the following century the statue was copied in marble and it is this version that is today in the Uffizi in Florence. Sometime before 1634, this copy served as the inspiration for PietroTacca’s fountain. I’ve loved this sculpture since I first saw the Uffizi copy many years ago. The Campbell examples were presented by one of the board of governors because the Campbell crest is a boar. It’s undeniably kitsch, but there is something charming about it all the same. The second ‘marmite’ item on the agenda was the levitating saint sculpture that hangs on the side of the extended gable of the Central Hall. I’m not against all religious-inspired art per se, but this figure with a hollowed out chest cavity and boys in the folds of his garment (depicting the sporting and academic prowess of the establishment) is just creepy.

After some warming coffee and biscuits, we were on our way again. The only other EHOD building open in east Belfast on that Sunday was Stormont Castle. The previous year I had gotten to see Parliament Buildings on the Stormont estate, but didn’t make it as far as the castle. We parked down by the rather excellent Mo Mowlam Children’s Park – if you’re about this area and have small children, it’s a great place to go – there’s even a van that sells good coffee to the tired parent. As we wandered up the hill we spotted sets of metal plates bolted into concrete slabs. These are the remains of the anchors for barrage balloons, used to protect Parliament Buildings from attack during WWII.

Today Stormont Castle is used as the chief meeting place of the Northern Ireland Executive. The original structure was built by the Cleland family in 1830 on what was then known as ‘Storm Mount’. Soon after completion it was described as a ‘large, plain house with very little planting about it’. It was redesigned and extended in 1858, in the Scottish Baronial style, by local architect Thomas Turner. At this time it was also granted a name upgrade to ‘Stormont Castle’. It’s unclear as to how much of the original 1830s house still exists, trapped within the later structure. Certainly, the later additions included the entrance tower and waiting room, a ballroom, drawing room, several reception rooms, 14 bedrooms, servants’ quarters, and a variety of offices. The terraced garden and the lean-to glasshouse backed with bothies are also of this date. The Cleland family left the residence in 1893 and, for a time, the Castle was rented out. Initial attempts to sell the property failed, eventually being purchased in 1921 by the newly-formed Northern Ireland Government. The estate included the Castle on 235 acres, 100 of which were woodland, and was purchased for £21,000. The initial intention was to demolish the Castle, but this was rejected when the scale of local opposition became apparent. From 1933 until 1940 the Castle was used as the official residence of Sir James Craig, the first Prime Minister of Northern Ireland. It also served as the location of the Cabinet Room of the Government of Northern Ireland from 1921 to 1972. Prior to the Good Friday Agreement and subsequent devolution, it was used as the Belfast headquarters of the Secretary of State for Northern Ireland, Northern Ireland Office Ministers and supporting officials. As it still functions as a government building, in particular as the offices and meeting rooms for the First Minister and Deputy First Minister, we were asked not to take photographs. I, reluctantly, complied and am unable to show you any of the beautifully appointed rooms inside this fine building. Instead, I can only suggest that for European Heritage Open Days 2014 you come to east Belfast and see this and some of the other fine sights for yourself!

Notes:
To repeat myself from Part I: I am indebted to all the people who worked so hard to make European Heritage Open Days 2013 a success in Northern Ireland, especially the tour guides who took such time and effort explaining their buildings to the public. I am also indebted to those who provided photocopied guides to the various buildings. I have shamelessly reproduced much of their knowledge and research here, though I make no claims to ownership of the material – without it this post would have been a much poorer piece! Thank you all.

There is a persistent, if unverifiable, rumour that some of the more sycophantic, aspirational families of east Belfast name their children after the school above, in hopes of being looked upon favourably by the board of governors. While the practice is, quite justifiably, reviled by all sensible people, we must look more with pity than anger on these poor, misguided individuals. I would hasten to add that I do not personally believe this scurrilous rumour, but merely record its existence.