The Tale of The Archaeologist and The Keeper: Clearly a Fictitious Fable 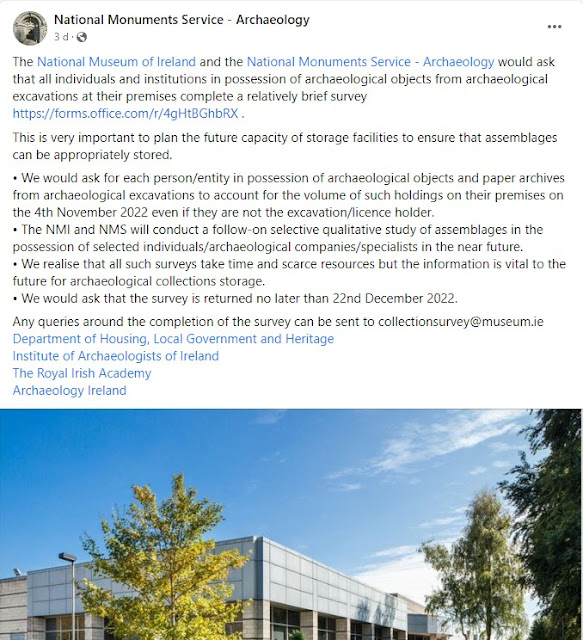 I’m giving up on this archaeology blog and from now on I’ll be using it to showcase my creative writing. Please read my latest piece of fiction: *             *             * Narrator: Let me take you back in time! The European: How far back? Narrator: All the way back! Well, back to the Bronze Age anyway … bump, click, whirr! Bang! And here we are in a place that will one day be known as Tullallen in the county that will eventually be called Louth.   We’re watching the digging of a ring ditch and the placement of a cremation burial at its centre. But we can’t stay here! … We have to go the couple of hundred metres to an area of land that will be called Mell. Here we see a rather strange, elongated ring ditch that is being filled up with burnt stone, and bone … so much bone! All of it burnt, but it includes both animal and human bone. Unfortunately, the veils of time dim our ability to see exactly what’s happening here and we, my dear reader – like a Morty to my Rick – are whiske
2 comments
Read more 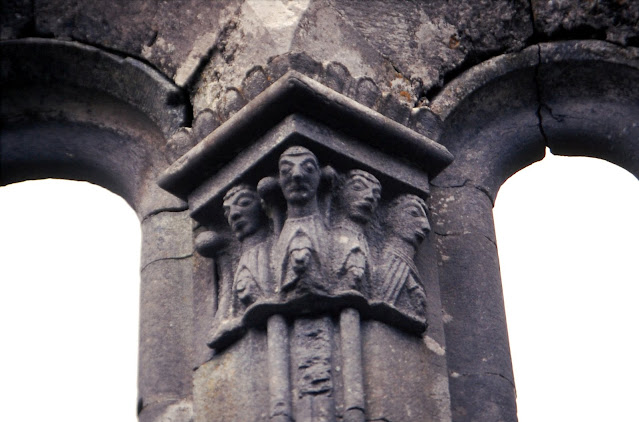 1998: Rowan Atkinson and assorted clerics on east window of chancel There are many fine and gorgeous archaeological and historic sites of all ages in the Burren, Co. Clare, but among my personal favourites is Kilfenora. Very little is known of St. Fachanan beyond the tradition that he founded the first church here in the 6 th century and that he is remembered as the first Bishop of Kilfenora. Whatever the truth in the tradition, no buildings survive from that early phase. In any event, Kilfenora wasn’t a particularly important religious centre until the mid-12 th century when it was upgraded to being a Diocese and much of the standing architecture belongs to the decades immediately after this increase in status. The western, nave, portion of this late-12 th to early 13 th century building is still used as a Church of Ireland place of worship, but the chancel is unroofed and boasts a finely carved window. The latter is decorated with several clerics, at least one of which bears more
Post a Comment
Location: Creggaun, Kilfenora, Co. Clare, Ireland
Read more 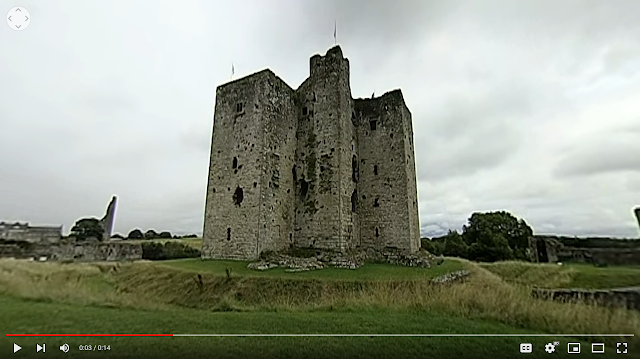 Trim Castle sits on the banks of the River Boyne and is mostly famous as one of the locations where Mel Gibson's 1995 movie Braveheart was set. At various times in the movie Trim stood in for the City of York and parts of London. This is unfortunate as the castle should be better know as one of the locations where Samuel Fuller's 1980 movie  The Big Red One , starring Lee Marvin and Mark Hamill, was filmed. Here the castle stands in for one in Germany during World War II. Even then, it only appears in the 2004 version of the movie known as 'The Reconstruction' that tried to better recreate Fuller's vision of the movie, before it was unsympathetically re-edited by Warner Bros., but I digress. The castle has a long building history that stretches from the 12th century onwards. You can read all about it (and the movies) on the Wiki page [ here ]. I’ve compiled the tour into a consecutive YouTube playlist [ here ], or you can access each video clip individually here: P
Post a Comment
Location: Castle St, Trim, Co. Meath, C15 HN90, Ireland
Read more 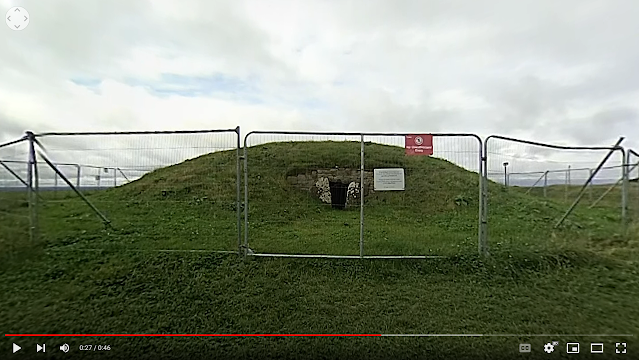 I’ve taken my 360-degree 3D Vuze camera to some sites that are interesting and important to me, but they’re hardly well known. That changes now! A while back I had the opportunity to go to Tara, Co. Meath and play around up there. Unfortunately, the camera wasn’t as excited to be on this important site as I was, and insisted on repeatedly cutting out after only a sort amount of time filming. For all that, I think they resulting short clips are worth presenting to give a feeling for the place. If you don’t already know, the Hill of Tara is an ancient ceremonial and burial site and I will not attempt to paraphrase the entire Wiki page here, but go have a read for yourself [ here ]. I’ve compiled the tour into a consecutive YouTube playlist [ here ], or you can access each video clip individually here: Standing Stones in Churchyard Pt. I [0:15] Standing Stones in Churchyard Pt. II [0:30] Ráth Chaelchon (Sloping Trenches) [0:13] Banqueting Hall [0:13] Ráth na Seanadh (the
Post a Comment
Location: Ross, Tara, Co. Meath, Ireland
Read more 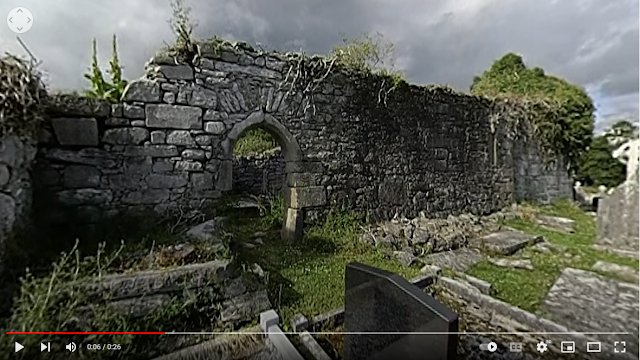 There’s something of an inevitability about it … if I start talking about Killogilleen [ here ], you can be sure that I’ll soon get around to blathering on about Killora. So, as I was pottering about east Galway with my 3D 360 Vuze camera, it was no surprise that I’d follow up my visit to Killogilleen with one to Killora. What I say about one I repeat about the other … there’s noting ostensibly special about these sites – to a greater or lesser degree they’re pretty much typical of rural west of Ireland church sites. Both Killora & Killogilleen have standing church ruins dating from around the late 15 th century, with tantalizing hints of earlier activity, possibly going back to the 13 th century. What sets them apart from others is that fact that they’ve been the focus of (sporadic) research for nearly 30 years. I’m reminded of an episode of the TV show QI that asked the question ‘Where Is the Best Place to Discover A New Species?’ [ here ]. In amongst answers both comedic and
Post a Comment
Location: Killora, Carrigeen, Co. Galway, Ireland
Read more 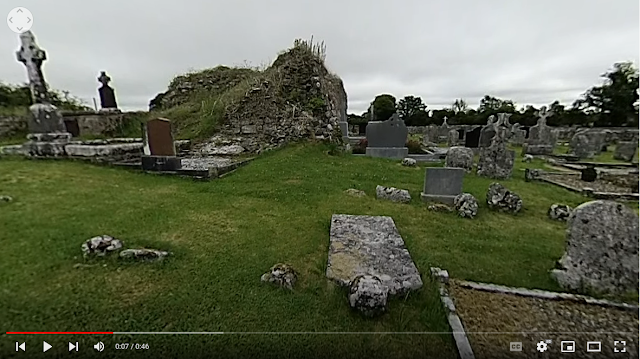 There’s probably nothing to really recommend a visit to Killogilleen church and graveyard, near Craughwell, Co. Galway. It’s rather typical of traditional burial sites in rural west of Ireland … there’s a ruined 15 th century church, there’s dated memorials going back to the 1600s, and continuing as late as the 1980s. You seen one you seen ‘em all! Right? … not this time! Back in 1996 I was employed on a F Á S Scheme to oversee the cutting back of the ivy and a general cleanup of the site. I was also tasked with compiling a book of the gravestone inscriptions on the site [ available here ]. One day in July I got called over to see ‘something interesting’ that had just been found … I’d have a few of these calls and for a variety of reasons. Some were cool architectural fragments that were reused as grave markers, some were just rocks (used as grave markers) … in a graveyard? Who'd believe it? I think it’s fair to say that I wasn’t filled with tingling anticipation at this latest di
Post a Comment
Location: Killogilleen, Co. Galway, Ireland
Read more 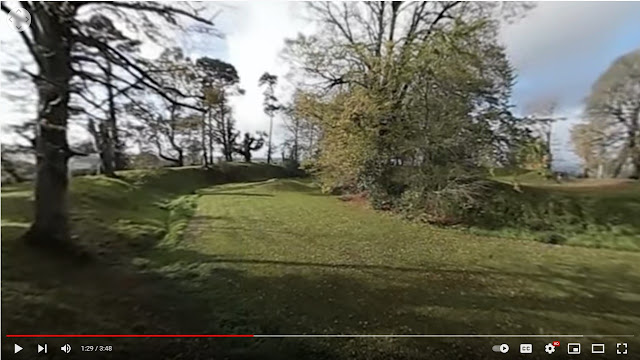 I don't really keep a list of archaeological sites that I'd love to see fully excavated, but if I did Tullyhogue Fort, Co. Tyrone would be up there! Today, it's a series of grassy banks with a wonderfully waterlogged ditch. It would be a pain to excavate safely, but the potential for well preserved organic artefacts and environmental evidence could be huge! The site probably started off in the prehistoric period (it's a hill in Tyrone - I defy you to not find evidence of prehistoric activity!), and by the Early Medieval a ringfort/rath had been built there. It was, evidently, an important place in the landscape as each new O'Neill was obliged to schlep over to Tullyhogue from Dungannon to be formally inaugurated by an O'Cahan wielding a shoe. The origins and significance of the 'shoe ritual' are obscure, but appear to derive from the 1979 epic movie Monty Python's Life of Brian. OK ... I'm joking, but have you read the nonsense some prehistorians
Post a Comment
Location: Tullyhogue, Cookstown BT80 8UD, UK
Read more
More posts