Review: Hidden History Below Our Feet: The Archaeological Story of Belfast 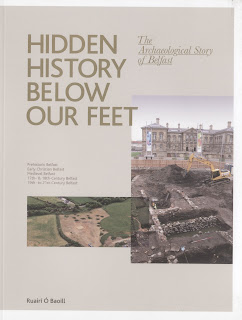 What do you think of when you hear the name ‘Belfast’? I’m sure some people will say The Titanic. For others the name may conjure up images of too many years of sectarian hatred and murder. A select band will immediately think of its heady days as a powerhouse of Empire, with major ship building and linen works, along with a whole host of industrial marvels. Nonetheless, I feel that most people would be imagining the city for quite a while before they used words like ‘prehistoric’ or even ‘Medieval’. Ruairí Ó Baoill, excavations director with the Centre for Archaeological Fieldwork at QUB, has taken on just that challenge – not only to bring together the disparate threads of the story, but to do so in a popular format.

I realise that using the term ‘popular’ is generally considered by professionals in any field to be something of a pejorative. It is taken to imply that the product is somehow watered down and ineffective. At the very least, the implication is that there is nothing here for the serious student. Hidden History Below Our Feet should not to be confused with this category of ‘popular’. I think it would be best to describe the format as ‘engaging’ in that it is visually attractive and lavishly illustrated, but there is no ‘dumbing down’ of the scholarship within.

Chapter 1, The Prehistoric Archaeology of Belfast, begins with a map and gazetteer of the main ancient sites known in and around the city. As the author points out, the fact that the modern core of Belfast is built on low-lying, estuarine clays, and was probably unattractive to settlers, is among the reasons that little of this period has been recovered. However, relatively large numbers of prehistoric sites are known from further up the Lagan Valley, as well as from the upper slopes of Black Mountain and Cave Hill. After a brief introduction to the underlying geology and geography of the city, Ó Baoill describes the Irish Mesolithic and how the evidence from Belfast fits within that framework. On page 19 is the first example of a beautiful thematic device that recurs throughout the book. This is a three-page-wide fold-out, showing an imagined aerial view of Belfast looking south during the Mesolithic by artist Philip Armstrong. It shows a number of small settlements, looking quite isolated among the vast forests that covered the landscape. To be honest, my first impression of this feature was that it was ‘popular’ and definitely in the pejorative sense – nice pictures, but no archaeological worth. However, the more I have looked at it, the more I have come to realise that it is a powerful and eloquent statement, illustrating the relative isolation of individual families and the fragility of their existence – and every bit as valuable and instructive as any other was of portraying the evidence. My only quibble with this particular example is that the houses depicted appear to be in the ‘roundhouse’ tradition, with vertical walls and distinct, thatched roofs, as opposed to the hemispherical domes usually associated with this period. Following this, the Neolithic is introduced and the place of Belfast is clearly defined within it. Short individual sections are devoted to the evidence from the Malone Ridge, Megalithic tombs, flint working etc. Similarly, the evidence for the Bronze and Iron Ages is assessed with devoted sections on settlement, burial, the Carrowreagh Complex, McArt’s Fort etc. The chapter concludes with a more in-depth case study of the prehistoric complex centred on the passage tomb and henge monument at the Giant’s Ring. Throughout the chapter there are recurring uses of the imagined aerial view of the landscape, either as single pages or a fold-out. With a bit of flicking back and forward between the various illustrations, I began to get a real sense of how this landscape was changed and developed through human action across the centuries.

Chapter 2, Early Christian Belfast, follows the same format as before with a distribution map and gazetteer of sites. Leaving aside the caveats inherent in any form of distribution map, it is interesting to see the locations of sites spreading from the hills down into the Lagan Valley, but still avoiding much the low-lying slob lands. This rather short chapter concentrates on the settlement evidence from the period, with short sections on the raths from the Malone ridge and the wider Belfast area (especially the Ballyaghagen site). Short sections are also devoted to souterrains, other settlement forms (including Ballyutoag), and churches etc. The chapter concludes with a more detailed case study on Shankill Church and Graveyard.

Chapter 3, Medieval Belfast, charts the progress of the development of Belfast from the Anglo-Norman intervention to the early 17th century when the town was granted to Sir Arthur Chichester. Following the distribution map and gazetteer, the historical background and John de Courcy are introduced. This is followed up a discussion of the Anglo-Norman settlement, its form and extent, along with the importance of the ford across the Lagan. The historical evidence for the Late Medieval Belfast and the Clandeboye O’Neills is skilfully blended with the archaeological record. Robert Lythe’s c.1570 map of Belfast is powerfully contrasted and complimented by the excavation photographs and recovered artefacts. The chapter closes with a more detailed case study on the castles of Belfast.

The distribution map at the beginning of Chapter 4, C17th & C18th Belfast, shows the further nucleation of settlement and, crucially, economic activity, moving into the core of the city as we know it today. As a minor aside, I am curious as to why ‘non-antiquities’ are listed in the gazetteer at Knockbreckan, Mallusk, and Derriaghy. As far as I can tell, these sites are nowhere referenced within the remainder of the chapter. As one would expect, the chapter proper opens with a historical sketch of Sir Arthur Chichester and his descendants, along with the troublesome O’Neills. The following section, on the mid 17th century defences is particularly interesting and Ó Baoill skilfully weaves historical and archaeological data together. He does not just to create a compelling narrative, but also provides a fair assessment of the state of our knowledge on the topic – what has been found and what has yet to be uncovered. There is no ‘dumbing down’ here. True, the historical and archaeological questions raised, not just in this instance, but across the book, may be more complex than the space allows, but the reader will come away with that understanding, as opposed to easy ‘just so’ answers. The chapter continues with an introduction to the earliest accurate maps of Belfast (Phillips’ 1685 maps), along with the challenges and opportunities that they present to the archaeologist. The section on the archaeology of the 17th and 18th century town is an excellent piece of work and draws together for the first time the large number of post-Medieval urban excavations in the town. Individual sections describe the findings at High St., Waring St., Hill St., Gordon St., Custom house Sq., and the Downshire Pottery on the Ravenhill Rd. etc. A sequence of short entries details some of the surviving 17th century buildings in and around Belfast, and the chapter is completed with a case study, focusing on the Belfast Pothouse, which produced tin-glazed earthenware during the 17th and 18th centuries.

Chapter 5, C19th to C21st Belfast, brings the story up to date with an examination of the textile and shipbuilding trades that made Belfast a capital of commerce. Other topics covered include the expansion of the city throughout the 19th century and the impact of the potato famine of the 1840s. There is a delightful entry on the burgeoning of antiquarian interest in the city at this time, and the lasting contributions made by such notables as Frances Joseph Bigger, George Benn, and Robert M. Young. This is followed by a series of short entries on the most notable of the urban excavations, including St. Anne’s Square, Cotton Court, Hill St., Gordon St. etc. Excavations of industrial sites include entries on the Annadale Brickworks and a clay-pipe manufactory at Winetavern St., while further entries discuss some of the investigations of the city’s docks, including Lime Kiln Dock and May’s Dock. The final case study examines the Ballymacarrett Glassworks. Again, excavation photographs, examples of the products made there, along with historic maps and photographs are woven together to produce an accessible and educational whole.

In a final concluding page, Ó Baoill asks ‘what have the nearly 100 excavations carried out between 1981-2008 told us about the story of Belfast?’ Frankly, if anyone reading this book is still asking this question by the end, they have not been paying attention. Ó Baoill stresses the advances in our knowledge that have been made and how these excavations give us insights in to the lives and material culture of the inhabitants that historical sources alone simply cannot. He deftly describes the future challenges for archaeology within the city – establishing the locations and degree of preservation of the major buildings of Medieval Belfast. While he acknowledges the challenges that lie ahead, he is essentially hopeful that archaeology has still much to contribute to our knowledge of our city and ourselves. The book also contains appendices, listing the archaeological sites of unknown date in Belfast and its environs, a comprehensive list of the archaeological excavations carried out in the city between 1981 and summer 2008, the latter with location maps. A final appendix is a glossary of terms used within the text – equally as useful for the novice as the more seasoned enthusiast.

For myself, the sad fact that this publication highlights is that of these nearly 100 excavations, only eight have been comprehensively published. Admittedly, some are like my own small-scale investigation at The ‘Prince’s Buildings’ on Ann St., where some late wall footings of no particular significance were uncovered across a number of test pits. Nonetheless, there are a number of large-scale excavations that deserve to see full publication. It is not just that without formal publication these sites will languish as ‘grey literature’, known only to a small band of dedicated researchers. These sites deserve to be more fully integrated into our collective knowledge not just of the city of Belfast, but as part of the broader canvases of Ireland and Empire. If for no other reason, Ó Baoill is to be congratulated for starting this process and highlighting the volume of data available. He is to be doubly congratulated on the depth of his research, for the first time bringing all this information together in a single volume. Beyond this, he has managed to carefully integrate the historical and archaeological narratives in a pleasing, readable style. As I have said before, there is no ‘dumbing down’ at work in this volume, just clear, concise writing in an educating and entertaining manner. Ó Baoill, and everyone else involved in its production, is to be congratulated for producing a mentally stimulating and visually exciting book. I can happily commend it to both professional archaeologists and interested amateurs alike – we all have something to learn from this beautiful and inspiring book.

Note: Belfast City Council and the Northern Ireland Environment Agency, in partnership with Tandem Design, have produced a website to promote the book, where you can see sample pages, learn a little more about the author, and purchase a copy. They also have a dedicated Facebook Page and a Twitter feed.

If you're going to do any shopping through Amazon, please go via the portal below. It costs you nothing, but it will generate a little bit of advertising revenue for the site!