Introduction
The existence of a bog-butter vessel from the Barony of Erris was brought to the attention of the author during the summer of 1993 while employed as archaeologist to the FÁS-sponsored Erris Survey Office, Belmullet. Since that time I have, sporadically, attempted to collect information on the circumstances of its discovery. For a number of reasons, I have been unsuccessful in this endeavour. As it is now 19 years since I started on this project, I thought the time was well overdue in making this discovery more widely known.

Discovery
As far as I am aware, the container was discovered within bogland in the townland of Mount Jubilee, in the Barony of Erris, Co. Mayo. Unfortunately, I have never been able to establish the exact location, the circumstances of the find, or even the year of discovery. I do know that some time after discovery, the vessel came into the possession of Mr. Gerard Murphy, then a teacher a Geesala National School, where it remained for some time. It was during this time the bog butter was consumed by mice. Today nothing remains of the butter except for a hard, off-white layer along the inside of the vessel, including the inner lip and lug handles. Unfortunately, with the passage of time since the discovery of this container it appears to have suffered some minor damage from woodworm (Anobium punctatum). The wood was kindly identified as Yew (Taxus) by Ms. Eneda Jennings of the Palaeoenvironmental Research Unit at NUI, Galway. 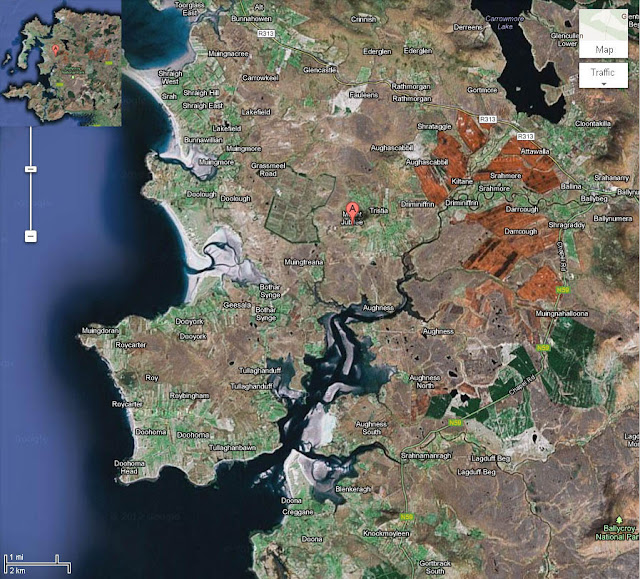 Description
The vessel is roughly carved from a single piece of wood and measures 31.5cm in overall height with an internal diameter of c.16cm. A vertical portion of the body, comprising c.40% of the whole is missing (22cm along chord) and was apparently discovered in this condition. The lid and base, which are also missing, were carved separately. The latter piece was indented into an irregular rebate, or ‘croze’ near the bottom edge of the vessel. The croze is roughly cut, ranging in section from triangular to rectangular. It is on average 3mm deep by 11mm wide, and varies between 1.8cm and 2.5cm from the lower edge of the body. The walls measure 26.3cm in average height and are vertical from the top 4.5cm of its height. Below this the sides bulge outwards before narrowing towards the bottom, giving an overall impression of being somewhat barrel-shaped. At their widest, in the centre, the walls measure 2.1cm in thickness. Two surviving handles project from the centre of the body and were carved from the thickness of the wood. As each is situated at approximately one-third intervals around the circumference it seems likely that the missing portion of the body possessed a further, similar handle. Each of the surviving handles is roughly ‘D’ shaped, with a triangular projection at the top and bottom edges. They measure 12.8cm in length, project c.2.3cm beyond the diameter of the body, and exceed from c.10cm above the bottom to 3.5cm from the top of the vessel. There are also two small rim- or lug-handles which project upwards from the rim. They are located almost directly opposite each other and were cut in one piece with the body. These lug handles are roughly sub-circular, only one of which survives complete. They measure roughly 4.8cm wide, by 4.5cm high, by 1.9cm (complete handle) and 1.7cm (incomplete handle) thick. The rim is internally stopped back between 1cm and 0.45cm from the inner edge of the lip, and is chamfered down from the upper edge between 1.6cm and 1.3cm to support a cover. 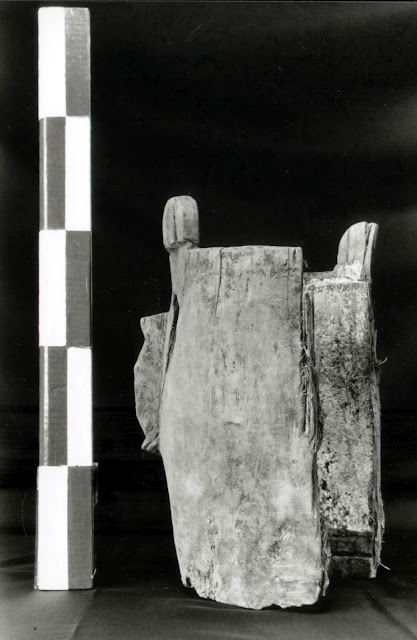 The bog-butter container in its present condition. Measurements are in 10cm divisions.

Discussion
Recent research shows that most counties in Ireland have produced the remains of bog butter in various forms of containers, though there is a significant concentration throughout the counties of the western seaboard. Of these the single largest concentration of bog butter finds comes from Mayo with 51 examples. To put this into the correct perspective it may be noted that the county with the next highest number of finds is Galway with 19 recorded instances (Earwood 1997, 25). Such a distributional pattern may be the result of a greater reliance on dairying in these areas and/or the number of bogs necessary for both deposition and preservation. She also suggests that one factor governing the location and rate of deposition may be that of transhumance as both this practice of summer grazing on uplands and the secretion of such containers appear to become less frequent after the 18th century (Earwood 1993, 12). 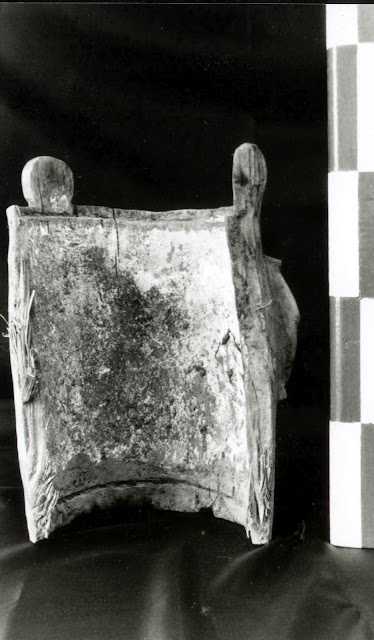 Internal view of the vessel. The white accretion on the interior surface is the surviving remains of the butter. Note the croze near the base and the rebate at the top for a lid.

Over the years many researchers have addressed the question as to the underlying reasons behind the deposition of a valuable food commodity in bogs. Sir William Wilde suggested that butter may have been buried in an attempt to improve its flavour or perceived nutritional value (Wilde 1858; O’Laverty 1892). Evans (1947) has even gone so far as to suggest that it may have been buried as a ritual offering. It has also been suggested that the bog butter was a form of tallow, deliberately deposited in bogs to allow it to ‘cure’ prior to being used for cooking (Thornton et. al. 1970, 24). To this list of possible uses Earwood has suggested that some bog butter may have actually been intended as a fat used in the preparation of material, such as the greasing of washed wool prior to spinning (1993, 13). 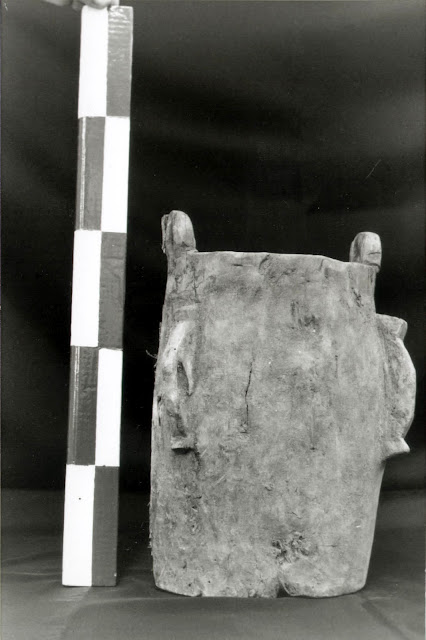 External view of the vessel.

The closest parallel which may be found for the Mount Jubilee container is Earwood’s type K3 (1997, 26). She defines this type as ‘... kegs with straight or only very slightly convex sides with two rim handles and two side handles, each of which has a single circular hole, and a flat lid ...’. Leaving aside the absence of a lid, the only significant difference between the Mount Jubilee container and the K3 type are the absence of holes through any of the former’s handles. Only two previously recorded examples of this type are known, both of which are, interestingly, from Scotland. The first was discovered near Kilmalug on Skye in 1931, though it now appears to have been lost (Earwood 1997, 29; Ritchie 1941). The second container was found in Morvern in Argyllshire (Macadam 1882). The butter from this specimen has returned a radiocarbon determination of 1802±35 BP (UB-3185, 127-332 cal AD) (Earwood 1997, 29). While both of these kegs possess side handles cut from the thickness of the body they differ from the Mount Jubilee example in that both are pierced and are roughly rectangular in shape while the latter displays distinctive triangular projections at the top and bottom corners. Further points of difference with the recorded examples of K3 type in the form of the fastening between the body and the base. As detailed above, the Mount Jubilee keg had its base secured to the body by means of a rebated croze while the Morvern container used a series of dowels forced through small holes to hold the two pieces together. The Kilmalug example is unique in this context as the base and body were sewn together. 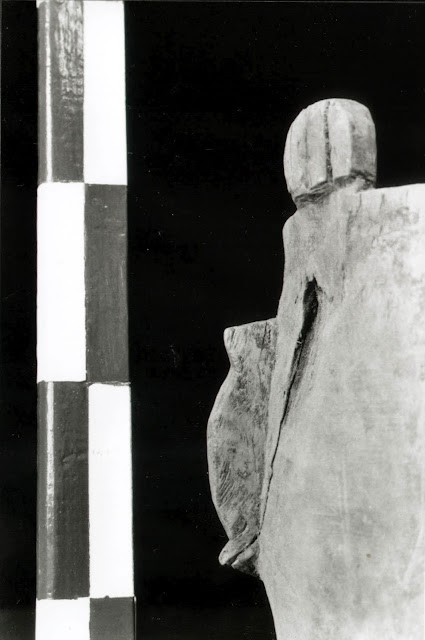 Conclusions
While the vast majority of bog butter containers discovered on the island of Ireland come from county Mayo, the addition of one more may not seem like a great advance in our knowledge. However, despite the difficulties in recovering all the information on the find spot and its circumstances, this is a small, but significant addition to our body of knowledge. It is all the more significant in that the Mount Jubilee vessel is of a type not easily paralleled in Ireland, but two similar vessels are known from Scotland. In the first instance, this raises questions about the relationships between Mayo and Scotland. Also, the date of the Morvern example, though not conclusively dating the Mount Jubilee keg, must force us to think about these relationships in an Iron Age context. While I have not given up hope of publishing this bog-butter vessel in a more traditional and formal way, I hope that placing this information in the public domain will assist other researchers and earn me some degree of forgiveness for not doing so sooner.

Acknowledgments
I would like to take this opportunity to thank the following for their assistance and encouragement: Maírin & Gerry Murphy, Belmullet; Prof. Etienne Rynne; Dr. Michael Connell and the staff of the Palaeoenvironmental Research Unit at NUI, Galway. I am especially indebted to Dr. Caroline Earwood for her help and advice, without whom this paper could not have been completed. Finally, my most sincere thanks goes to my wife, Jeanne, for her unfailing help and encouragement.

Macadam, W. I. 1882 ‘On the results of a chemical investigation into the composition of “bog butter” and of a “dipocere” and the “mineral resins” with notice of a cask of bog butter from Glen Gill, Morvern, Argyllshire and now in the museum’ Proceedings of the Society of Antiquaries of Scotland 23, 433 - 4.

Wilde W. R. 1858 ‘On the introduction and period of general use of potato in Ireland with notice of the substance called bog butter’ Proceedings of the Royal Irish Academy 6, 356 - 372.

Note: The radiocarbon determination cited in the text was recalibrated using the Calib 6.1.0 computer program and the IntCal09 calibration curve.


If you’re going to do any shopping through Amazon, please go via the portal below. It costs you nothing, but it will generate a little bit of advertising revenue for this site!