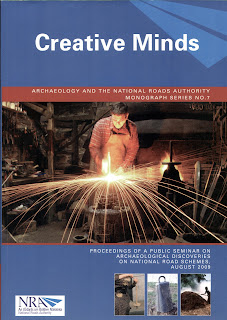 Creative Minds is the result of a 2009 public seminar on archaeological results from National Road Authority schemes in the Republic of Ireland. The volume is also the seventh in the ‘Archaeology and the National Roads Authority Monograph Series’ publications of conference papers. To anyone involved in Irish archaeology over the last decade, these volumes have become a staple source for the dissemination of the latest results and ideas on some of the major excavations of our times. It is inevitable that, with the completion of many road schemes, coupled with the general downturn in the economy, this volume should present more thematic overviews of entire road schemes, rather than the results of individual excavations. The volume is dedicated to the late Dáire O’Rourke, Head of Archaeology at the NRA from 2001 to 2010

From the point of view of my own research interests, the appendix presenting the radiocarbon determinations from the sites discussed in the text is of special importance. The appendix lists 99 radiocarbon dates, 61 of which are new to the IR&DD catalogue. However, in adding these dates to the resource a number of inconsistencies in the data were noted. To cite one example: the date Beta-171418 from Curraheen 1, Co. Cork, is here cited as 2210±60 BP, but is given as 2230±60 BP in the NRA Database entry for the site. While this is a small discrepancy, it is sufficient to produce different calibrated dates and, more importantly, lessen confidence in the accuracy of the published data in the site. This appears to be a recurring error in this series. As it appears to be confined to dates produced by Beta Analytic, I would guess (but I may be wrong) that it is due to the incorrect usage of the two types of date provided by the laboratory. I have written about this before (here (or here), and here), but it is useful to recap: Beta Analytic provides both a Measured Radiocarbon Age and a Conventional Radiocarbon Age. The Measured Radiocarbon Age records the amount of 14C surviving in the sample, while the Conventional Radiocarbon Age contains corrections to allow for isotopic fractionation etc. Of the two, only the Conventional Radiocarbon Age should be quoted in publications. Unfortunately, when both dates are available there is no easy way to distinguish which one is the MRA and which is the CRA, leading to a lack of confidence in both. My one other, albeit minor, criticism is that the one dendrochronological date quoted in the text is not afforded its own appendix, making it easy to accidentally overlook by researchers such as myself.

Despite these minor criticisms, this volume represents a valuable step in the process of synthesising data from numerous excavated sites on publicly funded NRA schemes and presenting it to a wide audience of both professional archaeologists and the interested public. The editors and contributors are to be commended for their dedication in continuing this important series.

Note: Robert M Chapple wishes to acknowledge the financial assistance provided under the Built Heritage element of the Environment Fund by the Department of Arts, Heritage and the Gaeltacht towards the Irish Radiocarbon & Dendrochronological Dates project [IR&DD Facebook Page].


[** If you like this post, please consider making a small donation. Each donation helps keep the Irish Radiocarbon & Dendrochronological Dates project going! **]
Posted by Robert M Chapple at 4:49 PM