Review: Of Troughs and Tuyères: The archaeology of the N5 Charlestown Bypass 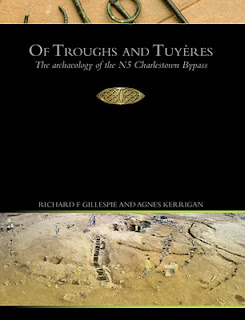 Since the arrival of the NRA Scheme Monographs in 2007 with Monumental Beginnings: the archaeology of the N4 Sligo Inner Relief Road the series has established itself as a benchmark in high quality academic publishing. Of Troughs and Tuyères: The archaeology of the N5 Charlestown Bypass is the sixth instalment in the series and continues this high standard of excavation reporting and dissemination. In the preface, R. M. Cleary contrasts the traditional focus of archaeological excavation on monuments with the opportunity to examine the, apparently, mundane landscapes revealed through large-scale, linear road projects. Indeed, the route was specifically selected to avoid all known archaeological sites. She argues that such schemes have forced us to revise much or our understanding of ‘past societies in a local and regional setting’. I would disagree only in that I see the significance of these projects (and their resulting publications) as having an island-wide significance, with the potential to revolutionise every aspect and period of Irish archaeology.

The volume presents a synthesis of the results of over forty excavations in eastern Mayo and a small portion of western Roscommon, covering approximately six millennia of human activity across the landscape. Chapter 1 (Kerrigan & Gillespie with MacDonagh) presents an introduction to the scheme, placing it in both planning and archaeological contexts. Brief, but informative, sections deal with the geography, geology, soils, and drainage of the area. This is followed by a wide ranging review of the general landscape character from the Mesolithic to 19th century Charlestown. Coinciding with my personal research interests, I am gratified to see a section explaining (mostly) the problems inherent in the use of radiocarbon data and the difficulties in selecting suitable samples for investigation. In what I see as a particularly brave stance, the authors highlight one spurious date from a cremation burial at Lowpark that produced Bronze Age pottery, but dated to the Neolithic (4840±50BP, Beta-23161). In such instances it would be all too easy to hide this anomalous date deep within the text and conveniently dismiss it. Placing it here within the introduction to the project speaks, to me at least, of a commitment to address all aspects of the results, not just the ones that neatly fit the other evidence. I have previously argued for the improved reporting of both radiocarbon dates and their associated meta data, and I applaud the note that the Beta Analytic dates were calibrated using the IntCal04 curve, albeit with the simplified Talma & Vogel (1993) system – the latest versions of Calib or OxCal are definitely to be preferred. Similarly, the dates from Groningen are noted as having been calibrated using IntCal04, but there is no indication of which computer program was employed. It is a minor point, but it should be remembered that different computer programs, even using the same version of the calibration curve, may give different results. Thus, for complete inter-date comparability it is strongly advised that the same curve and programme be used across the range of returned dates and that these choices be made explicit within the text.

Chapter 2 (Gillespie) reports on the Neolithic excavations at Sonnagh II, Ballyglass West I, and Cashelduff I. Of these, the most interesting (and contentious) is undoubtedly the Early Neolithic sub-circular structures at Sonnagh II. We are long-used to rectangular houses of the Early Neolithic period and such an early sub-circular feature is clearly anomalous (5275±35BP, GrA-35591). Indeed, the author struggles to find appropriate parallels and falls back on structural similarities with the Curraghatoor 3 structure in Co. Tipperary. Though that particular structure it is not directly dated, he notes that the Curraghatoor complex is significantly later than the Sonnagh evidence, dating to the Late Neolithic and Early Bronze Age. Considering the implications for our understanding of the Early Neolithic, one can only regret that further samples were not directly dated. It may well be that the gravelly fills did not provided sufficient charcoal for further dates, but we can only hope that, now the potential importance of this site has been recognised, efforts will be made to reinvestigate and re-date any surviving samples. Chapter 3 (Kerrigan & Gillespie) tackles the large volume of Bronze Age burnt mounds and burnt spreads discovered in the course of the project. It is impossible to pick out as many interesting features of the excavated examples as I would like, but the recovery of a tin bead from Sonnagh V (perhaps imported from Switzerland) is a major addition to our understanding of these, generally artefact-free, sites. As the author points out, it speaks of long-distance trade and contacts, placing the Irish evidence within a truly international context. While the illustration throughout the volume is superb, I would like to particularly note it here as the judicious use of colour and shading to define the surviving wooden elements within troughs is excellent and strongly contributes to the quality of the work as a whole.

Chapter 4 (Gillespie) is, by a considerable margin, the longest in the book, weighing in at 163 pages. It deals with the reporting of the previously unknown archaeological complex at Lowpark. The earliest evidence from the complex dates to the Early Neolithic, with additional activity in the Bronze Age. However, the major phases of activity centred on the Iron Age and Early Christian periods, when the site was used as an iron working area, complete with semi-sunken workshops, anvils and a large volume (c.1.5 tonnes) of iron slag. The Neolithic activity included a number of pits and a particularly rare Grooved Ware timber circle. During the Early Christian period the site was enclosed, not by the usual rath ditches, but by timber palisades made from split planks. Settlement here appears to have been of a considerable duration as there was evidence of repair to the defenses. Amongst all the spectacular finds of the ‘Celtic Tiger’ years, now finding their way into print, it is easy to lose sight of the importance and rarity of individual sites. Lowpark is certainly unique within the Irish archaeological record and is the chief basis for my contention of island-wide significance for this volume. The domestic finds from the site, including rotary querns, lignite bracelet fragments, a bone pin, and beads are all well attested on other sites across the island. However, the recovery of the gold filigree panel, with its close parallels to Lagore, Co. Meath suggests high-status associations. Another important result of the Lowpark excavation has been the recovery of high-quality samples for dating from the souterrains. As Clinton (2001) has shown, souterrains are notoriously difficult to date. Thus, firm evidence of construction in the 6th and 7th centuries is much welcomed.

Chapter 5 (Gillespie) describes the excavation of a bivallate rath and souterrain at Cloonaghboy. Here too dating evidence was recovered from postholes associated with the souterrain, placing construction in  the period from the early 7th to the mid 9th centuries. Unfortunately, severe truncation of the interior had erased any trace of the structures that once stood here. Chapter 6 (Kerrigan & Gillespie) begins with an examination of the charcoal production pits, the majority of which dated to the 11th to 17th centuries. The chapter continues with descriptions of a small number of vernacular houses, along with some miscellaneous sites encountered on the project: a set of three stepping stones across a stream (Ballyglass West) and a wood-lined drain (Cloonaghboy). Appendix A lists the 81 radiocarbon dates commissioned by the project and is a significant addition to the Irish corpus. An accompanying CD also lists the radiocarbon dates, along with pottery reports from Lowpark (Appendix 2), the lithics (Appendix 3), the gold filigree panel (Appendix 4  - an edited version also appears as ‘side bar’ within the main text), Lignite artefacts from Lowpark (Appendix 5), ferrous and non-ferrous artefacts and stone artefacts from (Appendices 6a-c), the Sonnagh V tin bead (Appendix 7), metallurgical residue (Appendix 8), faunal remains (Appendix 9), burnt remains (Appendix 10), wood and charcoal (Appendix 11), macrofossil plant and insect remains (Appendices 12 & 13), along with geography and geology (Appendix 14). A separate folder also provides the original final excavation reports from the sites as PDFs. If I am to be honest, I am rather ambivalent about the relegation of specialist reports to CDs or similar media. It is all well and good now while the technology is still current, but inevitably that technology will move on and these valuable appendices will be lost to all researchers without access to ‘legacy systems’. Even within recent memory we have seen the fashion for microfiche sheets come and go, leaving us with volumes of data so close, but just beyond reach. On the other hand, it is not as though these appendices could easily have been incorporated into the volume for a relatively minor outlay in costs – they represent, by my count, an additional 482 pages. Even leaving aside the additional 2130 pages of PDFs of the original excavation reports, that is a vast amount of data. I do not raise this as an issue solely with this volume, but as a long term archival issue that must yet be addressed.

If I had to identify any faults in the publication, it is the continued use of ‘fulacht fiadh’ over the preferable terms ‘burnt mounds’ and ‘burnt spreads’. It feels churlish to speak about this again, but I do believe that we must move away from this inaccurate and out-dated term. On the other hand, my personal preference is for the out-dated term ‘Early Christian’ over the more commonly used ‘Early Medieval’. In this context, my complaints may be viewed as personal preferences that in no way impinge on the quality of scholarship or value of the data presented here. Like the other titles in the NRA Scheme Monograph series, this is an impressive volume that materially adds to the collective knowledge of our past: both for the Charlestown area and the island as a whole.

Note: Robert M Chapple wishes to acknowledge the financial assistance provided under the Built Heritage element of the Environment fund by the Department of Arts, Heritage and the Gaeltacht, towards the Irish Radiocarbon & Dendrochronological Dates project [IR&DD FacebookPage].