I was going to post something completely different today. I had it all set up & all I had to do was hit ‘publish’, but I wandered on to Twitter and saw a tweet from UCD's Steve Davis (@AerialAndBugs) about a one-star Tripadvisor review of The Giant’s Ring, Co. Down. 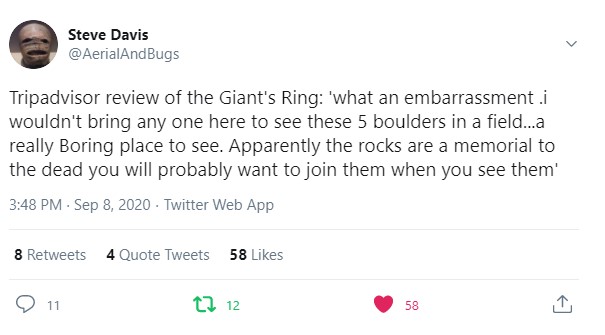 Back in July 2015 user ‘mark r’ wrote a review under the title ‘Giants ring..Giant let Down’:

“what an embarrassment .i wouldn't bring any one here to see these 5 boulders in a field .that you cant find anyway .someone has taken all the signs away. good on them ..a really Boring place to see .apparently the rocks are a memorial to the dead.you will probably want to join them when you see them .sorry but its pants” [sic.]

My first instinct was to disagree with this awful review (and many commenting on Steve’s Tweet did exactly this). My second reaction was ‘Nobody mentioned the fact that the carpark there is a gay pick-up area?’ Indeed, once I had a look at Tripadvisor it became clear that the other three 1-star reviews all relate to that theme. I’ve nothing against how any consenting adults wish to find a modicum of physical happiness in this cruel world, but, personally, I have a one-penis-per-bed rule and I prefer that to be mine. I discovered the non-archaeological reputation of The Giant’s Ring in 1999 when I had a wonderful job as Site Supervisor working on Barrie Hartwell’s excavation of Ballynahatty 5, in the next field over. It remains one of my best and happiest memories in my entire archaeological career – the weather was gorgeous, I was working with dedicated, enthusiastic (read: naive) students, and the pay … oh, the pay was brilliant! It was at university rates & so much better than what I was getting working for a commercial company. How good was it? Well – it was so good I was able to go out and buy a mid-range VCR from Argos and still have money for the rest of the week. I haven’t even plugged it in in years, but I still have it. My kids discovered it in the back of a cupboard a while back and regarded it as some form of ancient, alien creation for a dark time before touch screens and digital downloads.

On your average morning the team congregated at the Archaeology Department at Queen’s and were loaded into two minibuses and driven the few miles to the site. One morning, part way through the season, Barrie came to me and explained that we had a new addition to our group. After all these years I can’t remember her name, but let’s call her Rebecca. However, on that first morning Rebecca would not be able to make it to the Archaeology Department in time to meet the bus. Instead, her dad was going to drive her to near the site – not at the site … but near. Rather than negotiate the tangle of back roads to get to the site entrance, it was agreed that Rebecca would arrive to the carpark at The Giant’s Ring and that someone would meet her and guide her across the field to an exciting day of excavation. Turns out that person was me. Sometime around 09:30 on a bright, late summer’s morning at the end of the last century the keen observer could have spotted me making my way across the freshly manured stubbled fields of Ballynahatty in the direction of the Giant’s ring carpark. From our vantage point at the excavation, we were well aware that the great earthwork and megalithic tomb were a much-frequented exercise and area for both dogs and their owners. However, on clambering over the fence, I was surprised to see that the carpark had quite so many cars. I was more shocked the several of these cars appeared to be occupied and by (exclusively) men who seemed more dressed for a business meeting than anything else. I wasn’t sure if Rebecca had already arrived, so I attempted to scan the faces in the cars for any clue as I stood there looking stately and heroic (these are my own rose-tinted memories, so believe me - stately and heroic I most certainly was!). After a short while I noticed that the occupant of one car appeared to be beckoning me over. Feeling foolish that I’d not spotted them earlier, I ambled over to the car and was (again) surprised that while there may have been ‘dad’ there was no ‘Rebecca’ in evidence. As the window rolled down, and definitely confused at this point, I spluttered out: ‘Er … are you Rebecca’s Dad’. I am now of the opinion that the middle-aged gentleman in search of affection seated in that car was probably as confused as I was with that question, but gamely decided to buy into whatever fantasy I was proposing. Unfortunately, his answer of ‘Sure, if you want it like that. I can be ‘Rebecca’s Daddy’’ did not bring the clarity I desperately needed to the situation. It was right about then that the real Rebecca hoved into view, being chauffeured by her real and actual father. After a few questions to confirm identity (I do try not to make the same mistake twice in one day!), I took the young student back across the heavily manured field and into the care of our excavation director. Later, when I related my story to Barrie, he looked at me wide-eyed and said ‘Oh, I thought you knew’. His good-natured laughter at my discomfit still rings in my ears!

Anyway, a few weeks ago I was back to The Gaint’s Ring with my 360 Degree camera perched atop my trusty bicycle helmet to record some immersive videos of the site for your enjoyment and delectation. I hope you enjoy the experience and are reminded how gorgeous the site is or, perhaps, why you should come visit in person. If meeting people for anonymous gay sex in carparks is your thing, it seems that there’s still a thriving, if discreet, trade available (as it were). However, the archaeological site is well worth the visit and certainly worth more than a single-star review!

You can view it on an ordinary browser, but for best results we recommend the immersive experience that comes with an Oculus/Google Cardboard headset. Please feel free to Like and Share the video and Subscribe to the Archaeology 360 channel. If you’re feeling peculiarly generous and wish to help purchase snacks to sustain the Chapples Minor in the field, please drop something in the Tip Jar on the top right of this page.
Posted by Robert M Chapple at 1:08 PM