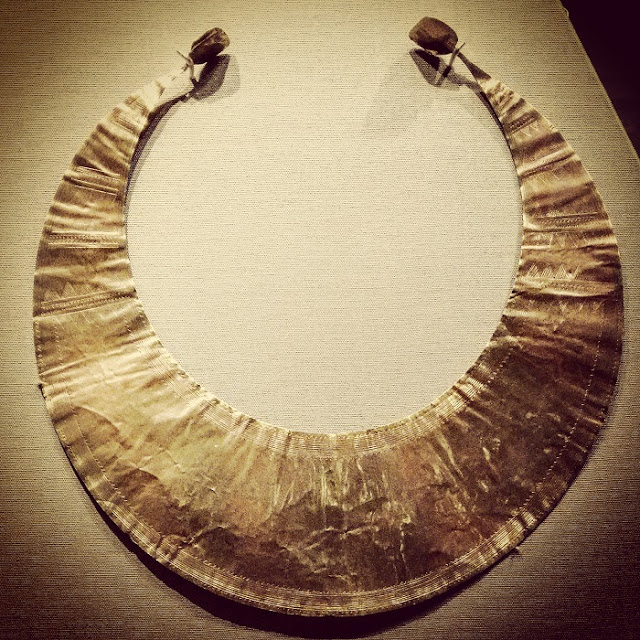 Continuing my series of images of artefacts from the National Museum of Ireland, I’d like to highlight the beautiful gold lunula from Rossmore Park, Drumbanagher, Co. Monaghan.

Conventionally, these artefacts are divided into the groups know as ‘Classical’, ‘Unaccomplished’, and ‘Provincial’. The Classical variety show the greatest skill in their manufacture and the greatest symmetry in their decoration. The Rossmore Park is a particularly fine example of the Classical type and is thought to date to around 2000 BC.

It is often thought that, given the probability that they’d be uncomfortable to wear, lunulae may have been worn infrequently – just on special occasions where the display of status and power was important. I would parallel this with many women’s approach to wearing high heels – rather uncomfortable and just for special occasions and/or when power and status displays are needed. I want to deliberately make that link between women and power because (despite the simplistic modern linkage of women and jewellery) the conventional imagery of high status individuals in the prehistoric past is almost exclusively dominated by images of males. This is particularly relevant as osteological examination of Bronze Age burials frequently indicate that women were the recipients of high status burial provisions. So why shouldn’t we imagine that they held power and status in life too?

Whoever – male or female – wore this wonderful lunula would certainly have commanded the attention of all. Whether catching the rays of the sun at an outdoor gathering or glinting madly in the firelight, all eyes would have been upon them and every ear attending to their words …
Posted by Robert M Chapple at 8:45 AM