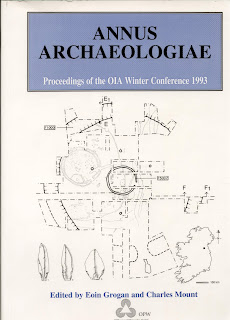 Since I started this blog in August 2011, and realised that there was some interest in archaeological book reviews, I have pretty much kept to the latest offerings available to the profession. Thus far I have published seven reviews of books, all of which were released either in 2010 or 2011. This review is a little different as the book I have chosen was published some 17 years ago, in 1995, and presents papers from a conference held in UCD two years previously. Even the sponsoring body of the conference, The Organisation of Irish Archaeologists is now long defunct.

To explain my choice, and its significance, I need to go back a few years. Around 2007 I received a specialist report on a collection of flint from a site I had excavated. In the bibliography for the report was a reference to Annus Archaeologiae. As I had never come across this particular volume, and was intrigued by the Latinate name, I contacted the flint expert and asked for a little more information. I don't remember his exact words, but they were along the lines of: 'it's pretty hard to get, but if you can find it do buy it - it is really excellent'. There should be legislation against saying that kind of thing to a borderline-OCD bibliophile! Over the next few years I tried tracking the book down, but to no avail. Eventually I found a copy for sale on AbeBooks for about £30 from a book seller in Sweden. I placed my order, but when the proprietor went looking for the item it was missing - presumed lost or sold. My money was refunded and my hopes of owning a copy appeared to have stalled. Some time later Charles Mount and I got to talking on Facebook. After having chatted back and forth for a while I decided to mention my quest for the ‘lost’ book that he had co-edited. I explained that I presumed that it was long out of print and unavailable, but that I’d gladly pay for a photo-copied reproduction. I can only say that I was gobsmacked when I received an email back informing me that not only did he have a spare copy, and that one was already in the post to me, but that he still had quite a number of the of the books still in his possession.

Having now had the opportunity to read through the six papers presented here, I can only conclude that it is a shame that this book is not better known by the archaeological community. In the first paper the late Elizabeth Anderson and Gina Johnson present ‘Irish Later Mesolithic Flint Technology: Further Developments’. They report on a project of refitting and morphological analysis on lithics from the excavation of a Later Mesolithic industrial site at Bay Farm I, Carnlough, Co. Antrim (Woodman & Johnson 1996). They compare the material to that recovered from Newferry, Co. Antrim (Woodman 1977) and conclude that the method of ‘Larnian’ core reduction, along with its related implements, were only one of a number of strategies and tool types current throughout the period. In particular, they see the ‘Larnian’ core as associated solely with the final stages of the Later Mesolithic. They also argue that the production of these core types, along with broader blades and flakes at the end of the Mesolithic may well be indicative of a changing approach to stone working. They conclude that the Bay Farm site is atypical of the Irish Later Mesolithic and that the core types used in the majority of other sites have yet to be identified.

Gabriel Cooney, Steve Mandal and Finola O’Carroll present ‘Stone Axes as Icons: Approaches to the Study of Stone Axes in Ireland’. When this paper was presented in 1993 the Irish Stone Axe Project was only in existence for three years and had already examined over 16,000 stone axes with Irish provenances. While the contents of this paper have been eclipsed by later publications (chiefly Cooney & Mandal 1998), this is an interesting snapshot of where the project was at this important stage in its development. The paper examines a number of aspects of the research and attempts to address wider issues, including the importance of stone axes in the archaeological record. An examination of the difference in axe lengths suggests that while the majority measured from 8cm to 16cm, a genuine distinction may be made for the largest examples. However, ethnographic parallels from Papua New Guinea are taken to suggest that both work axes and ceremonial axes may well have been of similar sizes, the only clear difference being the higher quality of the finish on the ritual objects. Petrological identifications showed that, by far, the most common stone used was porcellanite (over 4,800 examples), followed by pelite (c. 1800 examples). Of the other stone types identified, only sandstone and gabbro exceeded 200 examples each. At the time of the original presentation the details of over 9,000 axes had been entered on a database. Typically, the paper ends with the line: ‘The work goes on!’ 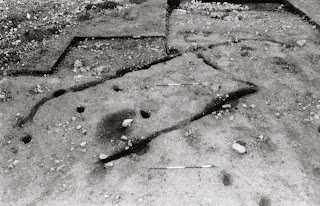 The late Prof. D. A. A. Simpson presents a paper on ‘The Neolithic Settlement Site at Ballygalley, Co. Antrim’. Outside of the brief interim reports in the Excavations Bulletin, there is relatively little published on this important site. To the best of my knowledge, there are only four publications of any substance on the site. In 1990 there was a brief piece in Archaeology Ireland (Simpson 1990) and an interim report in the Ulster Journal of Archaeology (Simpson, Conway & Moore 1990). Simpson (1996) also published a piece on the houses at Ballygally and a few years later a more general piece on the pitchstone from the site (Simpson & Meighan 1999). While the whole field of Neolithic house studies has progressed markedly since this paper was presented, it is still a valuable addition to the available corpus. If a practical example as to how much the field has moved on was wanted, it could hardly be better expressed than in Figure 3.5 in this paper where plans of all known Irish Neolithic houses could be comfortably accommodated on a single page: Ballygalley, Ballyglass, Tankardstown I & II, Ballynagilly, Newtown, and Knowth. Indeed, in the absence of a final publication on the site, such smaller pieces are all the more valuable. 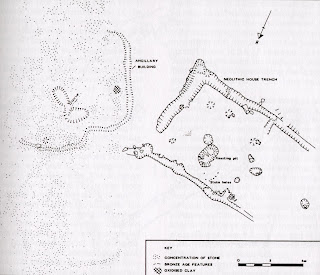 Eoin Halpin presented a paper on ‘Excavations at Newtown, Co. Meath’. The site was a partially-surviving rectangular Neolithic house, ancillary feature/out house, and various cut features containing contemporary artefacts. A Bronze Age pit burial with an associated pottery vessel and several postholes arranged in an arc were also recovered and investigated. Again, I may be wrong, but in so far as I am aware, there is precious little available in the published record about this site. There is a remarkably brief notice of its initial discovery (and that of Ballygalley, too) in Archaeology Ireland (Anon. 1991) along with an entry in the Excavations Bulletin for 1991. The following year Gowen and Halpin (1992) published a brief summary of the site, also in Archaeology Ireland. While the report in Annus Archaeologiae is nowhere near as in-depth as one would like for a final report on this interesting and important site, it is much more detailed than any of the other available materials. For this reason alone, Annus Archaeologiae deserves a place on the bookshelves of any student of Irish archaeology.

Conor Newman presented interim findings from his excavations at ‘Raffin Fort, Co. Meath: Neolithic and Bronze Age Activity'. Similar to the situation of Halpin’s excavation of Newtown, Co. Meath, there is a limited amount of published material available for this important site. To the best of my knowledge, there is only this publication, the interim reports from the Excavations Bulletin, and a published paper from a conference in Italy (Newman, Dillon, Molloy & O’Connell 2008). Until I began work on this review, I was unaware of the latter paper, but the title ‘Environment and ritual in a Late Iron Age context: an example from Raffin, Co. Meath, Ireland’ suggests that it is unlikely to be a large-scale exposition of the site data. This leaves us with eleven pages in Annus Archaeologiae as (currently) the single most detailed discussion of this incredibly important site. I have little doubt that, in the long run, this site will be the focus of a more in-depth and formal publication. Until that time, we have this near-lost gem to help fill in the blanks.

The final paper in the collection is Aonghus Moloney’s presentation of the ‘Irish Archaeological Wetland Unit: 1992 Survey and Excavations’. The paper presents short, but informative, reports on the Blackwater survey, Co. Offally, and a number of excavations. The latter include a togher at Annaghcorrib, Co. Galway; a gravel road at Bloomhill, Cos. Offaly and Westmeath; along with investigations at a crannog and burnt mound at Bofeenaun, Co. Mayo. In contrast to the above, the sites and survey dealt with in this paper have all been fully published (Moloney, Bermingham, Jennings, McDermott & O'Carroll, E.1995).

In some respects, I see Annus Archaeologiae as a failed publication. This is a comment neither on the contributors nor on the editors. Simply put, this volume failed to connect with the wider audiences it was designed to communicate with. Thus, it did not reach as many other researchers and writers as it could have and should have. It did, however, reach some of the right people – Waddell in The Prehistoric Archaeology of Ireland references Halpin’s site at Newtown, Co. Meath, and Simpson’s excavations at Ballygalley, Co. Antrim (though, interestingly, he omits Newman’s account of Raffin, Co. Meath, preferring the 1993 interim report from the Excavations Bulletin). Obviously, it also reached and influenced the flint specialist that set me on this quest in the first place. Nonetheless, I cannot but believe that Annus Archaeologiae failed to get a ‘fair shake of the stick’. In my review of the 3rd edition of Waddell’s textbook, I remarked how books come and go and how, as time goes by, they retreat from being first-port-of-call research resources as newer research becomes available. While some of the projects discussed here have produced their definitive publications (and they are to be much congratulated for doing so), the lack of final publications on Raffin Fort, Co. Meath, Ballygalley, Co. Antrim, and Newtown, Co. Meath, means that (after almost two decades) there is still much to recommend about this volume. In his Introduction to the volume, Mount describes the six papers as ‘snap shots of developing research at a particular period’. He sees this as one of the strengths of the volume, where interim statements are made quickly available to the profession so that they can begin to inform future debate at the earliest possible time. While not explicitly stated, I feel that there is an underlying assumption that these ‘snapshots’ are inherently disposable, once the major publications appear. The analogy with photography is, perhaps, unexpectedly apt as, with so many ‘snapshots’ they may end up becoming cherished items in their own right. They may a collection of snapshots, but they (or half of them, anyway) have yet to fade. Do yourself a favour – go and buy this rather excellent volume and help rescue a ‘lost’ gem!


If you’re planning to do any shopping through Amazon, please go via the portal below. It costs you nothing, but it does generate a little bit of advertising revenue for this site – please help!